Will Wright Gets His Numbers Wrong - Angers God!?

Spore fans are not quite as efficient as God. 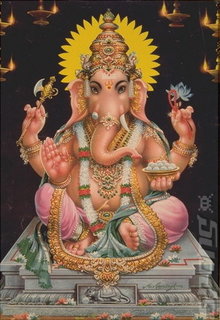 Now That's What We Call God III: Ganesh!
We wonder if 'The Honourable Rick Perry, Governor of Texas', who is to give the keynote at this year's E3 conference in the United States of Americashire was guffawing loudly at the sight of Spore top-man, Will Wright's presentation? During it Wright compared Spore to users to God - we assume he meant the white-bearded deity.

Governor Perry takes a vaguely similar view to Wright's - that God actually created the world (we imagine that Perry's tongue might be lolling a little while Wright's is firmly stuck in his cheek). Perry takes the whole thing a little extremely however, having added his support to Intelligent Design.

Wright's take is somewhat more amusing (or "outright, damned blasphmerizing!" if you're of the 'school' of Intelligent Design'). His presentation, reported by Joystiq, included such facts as:

In the span of 18 days, Spore Creature Creator users were able to create more than 1,589,000 species.

This means that Spore people are only 38% percent as efficient as God.

We're not sure where Will got his figures from though. In fact, we did some research via the highly-visible Answersingeneis.com and found that, "The Bible tells us that God created all of the land animals on the sixth day of creation. As dinosaurs were land animals, they must have been made on this day, alongside Adam and Eve, who were also created on Day Six (Genesis 1:24-31)", (there are more great 'facts' from Answers at the bottom of this story).

So, not seven days, Will - only one day. Meaning that Spore Creature Creators are merely 5.5% as efficient as the Yaweh.

Anyway, Gov Perry is due to do his speechifying on Wednesday the 16th.

2) This fits exactly with the evidence from the fossil record.

3) The Bible, however, makes it plain that dinosaurs and people must have lived together. Actually, as we will soon see, there is a lot of evidence for this.

4) God sent two of every (seven of some) land animal into the Ark (Genesis 7:2-3; 7:8-9)—there were no exceptions. Therefore, dinosaurs must have been on the Ark.

David Armstrong 15 Jul 2008 15:28
1/4
AiG has some interesting interpretations, but I wouldn't call it the most widely believed Christian organisation.

Anyway, good to know that some people have at least some knowledge of the bible.

In the past, most people knew lots about that book full of intolerant hateful superstition .

But if we try really hard, we can work towards a world where no-one knows anything of it.

Y'know, people that live in glass houses shouldn't throw stones. Have you read the Bible? If not, how can you condemn it?

And if you have... try the Koran. Try getting that banned and I guarantee that people throwing stones will be the least of your worries.

("All I said was that bit of halibut was good enough for Jehovah!")

David Armstrong 16 Jul 2008 13:43
4/4
Right,.. I couldn't have been referring to the AiG mentioned in the article.
Posting of new comments is now locked for this page.