Well, yes - it is Wii Motion Plus 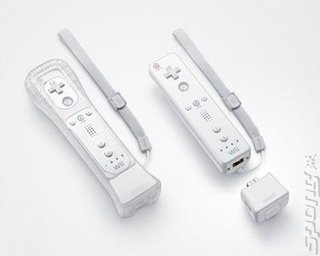 So, on the day of Microsoft's E3 Keynote where it is expected that it will reveal a Wii-like motion controller, Nintendo announces that it releasing its own update.

According to the press release:

"The Wii MotionPlus accessory attaches to the end of the Wii Remote and, combined with the accelerometer and the sensor bar, allows for more comprehensive tracking of a player?s arm position and orientation, providing players with an unmatched level of precision and immersion.

"Every slight movement players make with their wrist or arm is rendered identically in real time on the screen, providing a true 1:1 response in their game play.

"Nintendo will reveal more details about the Wii MotionPlus accessory and other topics Tuesday morning at its E3 media briefing."

So, Nintendo certainly thinks that Microsoft and/or Sony have something up their sleeves and is throwing this very cold water at it.

unless they hand these out for free, which i highly doubt. I'm not gonna fork over money for ANOTHER add-on to be able to enjoy all possible games. Wii is rapidly becoming the most expensive system out there. Two wiimotes, plus nunchucks, plus zapper, plus these things, one or two balance boards... to be able to enjoy all the wii "sensations"? Screw you Nintendo.

And what about the 3rd parties? Are they supposed to support all possible controller possibilities and combo's? Will "Skate It" be as enjoyable without the balance board as with it? Are they supposed to support both control options and give them as much thought? Should they start thinking about this add-on too? What about people with this add-on and not the balance board? Does Red Steel 2 have to be for players who own this, or should they keep the millions of gamers in mind that don't own this and which option should be the definitive one and get most attention?

Sorry Nintendo, you're starting to **** it up. This should have been implemented into the Wiimote to start with. Wii is getting crazy expensive, especially considering Nintendo hasn't been able to convince 3rd parties in nearly 2 years to make games for the system that either don't suck or aren't a minigame wagglefest.

Seriously, the only "add-on" Wii needs to get more developers on board and try out new stuff is a new CPU/GPU/RAM upgrade. We're missing out on all high-end core games, this isn't going to convince devs to start making those.

I thought Wii was supposed to make things more accessible? Explain to a mother why she has to buy a bunch of add-ons in order to play a certain game.

Ok... you must be joking. You mean to tell me that people don't have to fork out a bunch of cash for extra controllers and addons for 360 or PS3? Nintendo just came up with a solution to what the gaming world has been bitching about for the past 2 years and you want to complain? Hey, if they are ***ing things up so much then why is everyone in a tizzy about todays press conference?

schnide 15 Jul 2008 09:48
3/4
I completely agree with ozfunghi. What does this say to the gaming world? That their original motion sensing isn't good enough so they need to sell people another add-on to the Wiimote?

I have always - always - said that the Wii is a gimmick and I feel slightly vindicated now. I don't think that the Wii as a system, however much untapped market share it's discovered, is sustainable in the long term.

deezigner 15 Jul 2008 10:07
4/4
Um... ok.... So you won't be getting the DualShock 3, or PS Eye or even microphones for SingStore or Lips? You are more than welcome to your opinion that it's all a gimmick. But Nintendo is doing a pretty good job att making a whole bunch of people happy. The game industry has been dying, whether you want to admit it or not. Now some new experiences are showing up. And if the Wii was just a gimmick, then Sony and MS wouldn't be so eager to start copying it....
Posting of new comments is now locked for this page.