This is not a GTR game! 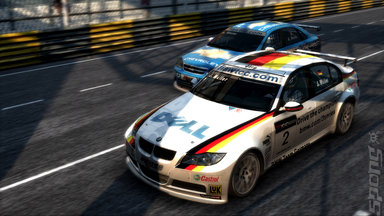 All Images (3) »
Atari has announced that it plans to release RACE Pro, the latest RACE game, exclusively to the Xbox 360.

The game is being developed by SimBin. There was speculation doing the rounds recently that SimBin's next game would be part of the GTR series, but you can take this news as confirmation that that is not the case.

Nonetheless, expect a hardcore racing sim of the type the developer is known for. The announcement bandies around various statements about ?unrivalled realism? and ?deep immersion?, but let's cut to the meat.

The game will feature official FIA championships and tracks (numbering at 13) from across the globe. Included will be the WTCC (World Touring Car Championship), Formula 3000 and Formula BMW.

In terms of cars, they'll range from 200 to over 1,000 horsepower and include vehicles from manufacturers such as Aston Martin and Saleen, while production cars such as Audi R8 and Dodge Viper SRT10 will appear on the track. More significantly, RACE Pro will bring the WTCC cars of Alfa Romeo, BMW, Chevrolet and Seat to the 360 for the first time. Players will even be able to squeeze behind the wheel of a Mini for the Mini Cooper Challenge.

Up to 12 players will be able to compete online. Also featured will be a 'Hot Seat' mode, which requires players to pass the controller to a mate at the appropriate moment. Quite how the 360 will be able to tell if you've done that or not, we're not right sure.

?Having personally taken the leap from 20 years of championship racing to racing simulation development, I am really excited for SimBin to be taking its own leap from PC to Xbox 360?, uttered Henrik Roos, CEO of SimBin Studios AB. ?We are proud to be taking this significant move with Atari, our trusted partner since our very first game.?

You can have a gander at the first screens below.
Companies: Atari Simbin
Games: RACE Pro