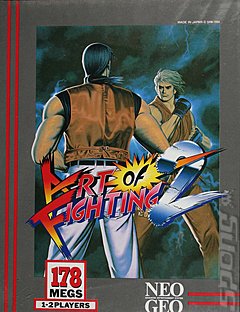 SPOnG suspects the bajillionth shoddy summer in a row is putting Nintendo in a bad mood, because this week's Virtual Console offering is looking awfully violent.

First up this week is Art of Fighting 2, first released in 1994 by SNK on the Neo Geo. It's about, well... it's about fighting. Fighting and becoming a champion. The game offers a Rage Gauge that enables players to set loose a deadly technique when the gauge has enough juice in it. SPOnG prefers not to fight angry, lest we lose control and accidentally kill someone. But, you know, this is just a game. Players can also use taunts to batter down their foes' mental energy and suppress deadly techniques, a feature Nintendo tells us is unique to this version. You can get Art of Fighting 2 for 900 Wii Points.

Also available this week is another Neo Geo title, Ninja Commando from Alpha. Do you see what Alpha did there? It took sneaky, stealthy, shadowy masters of the night (very popular in the 80s leading into the 90s) and combined them with over-muscled, "Huargh!" shouting, testosterone-fuelled monkey men (very popular in the 80s leading into the 90s) to create an implausible title for a fighter! Anyway, the game takes players through time periods including the Stone Age, Egyptian era and Spanish Civil War as they chase the sinister Spider in his pesky time machine. Players get a range of attacks to mess around with, including the option to turn into a beast. You can get it for 900 Wii Points.

This week's titles round the number of Virtual Console titles up to 235.
Companies: Alpha Nintendo SNK
Games: Art of Fighting 2 Ninja Commando