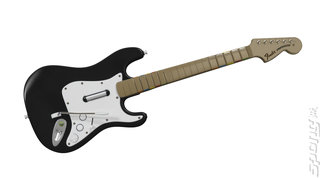 A Rock Band axe
Harmonix, MTV Networks and the owner of the two companies, Viacom, are all being sued by Konami over alleged patent infringement in Rock Band.

You can see the patents here, here and here.

The patents in question date back as far 1998.

Konami is calling for the defendants to be enjoined from further infringement, meaning the companies would either have to stop selling Rock Band or reach a licensing agreement with Konami. Konami also wants damages arising from the alleged patent infringement, alongside court costs.

Konami asserts that the defendants' infringement of the patents is “willful (sic) and deliberate”.

Konami is set to publish the forthcoming Rock Revolution, but has patents dating back to the last century thanks to the likes of its Guitar Freaks and Drummania games.

If you're wondering why Activision isn't embroiled in this thanks to the Guitar Hero series, it appears that Activision already reached an agreement with Konami. On the official web page for Guitar Hero the three patents in question are listed, indicating some sort of licensing agreement has already been reached between the two companies.

That's not to say that Activision hasn't had any patent trouble with its music games. Back in March Gibson, which used to have its branding on Guitar Hero peripherals, initiated proceedings against Activision for patent infringement relating to a "simulated musical concert experience."

Harmonix, which worked on earlier Guitar Hero games, also took a brief legal poke at Activision. After filing a lawsuit for unpaid royalties, however, it quickly withdrew it. The two companies apparently settled out of court.

Sounds Great, how does the briefcase controller work?