FIFA 09 Cover: Why the Flip Use John Terry? 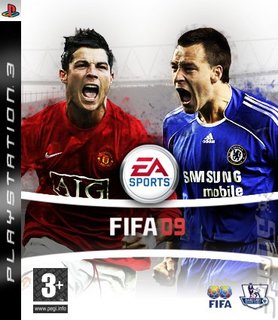 Ronaldo and John Terry - we so don't think so.
Chelsea captain and penalty-inexpert, John Terry is appearing next to want-away Manc United winger Ronaldo (the younger) on the front of the UK's FIFA 09 if a post on the PlayStationUniverse site is to be believed.

We have one question though: why would any member of the England team that couldn't even qualify for the Euro 2008 competition make in on to the front of EA Sports flagship title, let alone a penalty-missing centre-back?

We're saying that this cover is fake - just for that reason. So, who do you want to see on the cover? To the Forum with you!

Si Pie 10 Jul 2008 17:22
3/11
I can see why Cristiano Ronaldo would be on there but it's a gamble what with him possibly leaving. There's no way it's real though, as Terry is wearing the old Chelsea strip. No chance.

robert 10 Jul 2008 17:50
4/11
there should not even be a defender on the cover unless he was absolutely key to a teams seasons the only reason i could understand why john terry would be on there is because chelsea and man u. are rivals. i think the cover should be Lionel Messi (left) Iker Casillias (centre) Cristiano Ronaldo (right). all players were great players for their club and greatly responsible for their clubs success.

chelsea till i die 11 Jul 2008 12:00
5/11
All of u say he shouldnt be on the front cover a striker should u are all typical football no nothings defense is just as important as attack i support chelsea and john terry is my fav playa and it is easy to see that e is the bst defender in the world and yes i cryed when he missed the penalty but u are all forgeting the other guy on the cover missed aswell at least john terry fooled the keeper and wat about ronaldo he spooned the penalty against barca
u i say put him on the cover be different
JT BST DEFENDER IN THE WORLD

Dom 11 Jul 2008 19:37
6/11
That's clearly a fake. For one reason, they have last season's Chelsea kit. The new one is different. Also I doubt they would put Terry on the cover. FIFA games hardly ever put a defender on the cover and I highly doubt Terry would be their first choice after costing his team the Champions League at the end of last season. It is more likely they would put a more attacking player there e.g Torres, Drogba, Fabregas or perhaps Santa Cruz.

Why not Ronaldo & Fabregas?

That cover is 100% fake as it's the old Chelsea jersey as well..

Ruairidh 18 Aug 2008 09:52
11/11
I think that picture is a fake. Ronaldo is on a contract with PES so won't be on it regardless.
I'd like to see Rooney and Kaka cause hey I'm Scottish and it's unlikely to be any Scottish Players.