Are snakes slippery after all? 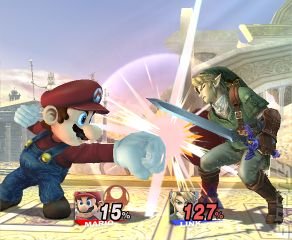 Nintendo?s Super Smash Bros. Brawl keeps on battling at the top of the Charts this week, with the Wii-exclusive hanging on to the Number 1 spot.

In fact, there's no change in the Top 3, with Electronic Arts' Battlefield: Bad Company sticking at Number 2 and LucasArts' LEGO Indiana Jones sitting once again at Number 3. That's not to say that any of the above perform as well as they did last week in terms of raw sales. Smash Bros. Brawl loses 48% of its first week sales, while Bad Company and LEGO Indiana Jones both drop 31%.

THQ proves that Wii owners' appetite for sports mini-games is difficult to sate, with Big Beach Sports climbing one spot from Number 5 to Number 4. Behind it is another title celebrating athletic prowess ? SEGA's Beijing 2008 for PC, PS3 and 360.

More importantly on the Olympic front, we can all breathe a sigh of relief as the world returns to its natural order. Mario & Sonic at the Olympic Games is back in the Top 10. After dropping down to Number 11 last week it's snuck back in at Number 8. Prospective mothers everywhere can breathe easy knowing they don't have to give birth to snakes...

A little ahead of Mario & Sonic is 2K's Top Spin 3 at Number 6 having jumped two places from Number 8.

Nintendo is the only company to have format exclusives in the Top 10, with Wii Fit still doing its thing, albeit with a drop from Number 4 to Number 7. Wii Play is also knocking around the Charts' upper echelons, up from Number 12 to Number 9.

Vivendi's The Bourne Conspiracy shimmies up from Number 15 to Number 10. It performs better than another film tie-in, Kung Fu Panda from Activision, but the high-kicking anthropomorphic action title is this week's biggest climber. It leaps all the way from Number 40 to Number 16.

It would appear that the time in the Top 10 for both Nintendo?s Mario Kart Wii and Konami's Metal Gear Solid 4 is over. The former drops from Number 7 to Number 14, while the latter slides from Number 6 to Number 15.

Next week watch out for Secret Agent Clank for the PSP and Sports Party for... yeah, the Wii. Naturally.