Time to get your fingers cold. 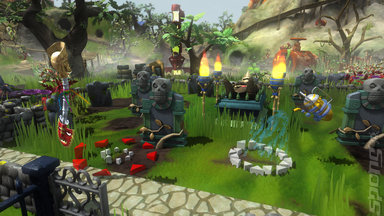 Microsoft has put a date to the next Viva Pińata game to hit the Xbox 360 - Trouble in Paradise.

September 5th is when 360 owners should expect to don their gardening gloves to try and lure the sweet-filled anthropomorphic cardboard boxes to reside in their little patch of land.

They might want to pull out their seal-skin, polar bear fur-lined gloves, too. They might also want to pull out some frayed denim shorts. Why? Rare is giving players the opportunity to venture outside their gardens into the Pinartic and the Dessert Desert to lure more exotic pińatas to their gardens. In the Pinartic they will find the likes of Pengums and Polollybears, while the Dessert Desert will yield such rarities as Camellos and Jameleons.

To keep them comfortable in the garden, players will be able to add patches of snow and sand to make them feel right at home. To SPOnG, having such disparate climes in such close proximity to each other sounds a little dangerous and like it's probably some kind of result of global warming, but there you go.

There will be more than 30 new pińata species in the new game.

Mark SPOnG recently took a trip down to see Rare and take a look at Pocket Paradise, the upcoming DS instalment in the Viva Pińata series. You can find his preview here and an interview with a couple of the guys from the dev team here.
Companies: Microsoft Rare
Games: Viva Pińata: Trouble in Paradise