ELSPA is handling it very nicely thank you. 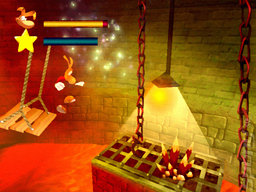 Them darned Rabbids?
John Penrose, the Conservative member of parliament for Weston-Super-Mare used yesterday's session in the Commons to ask Margaret Hodge*, the Minister for Department for Culture, Media & Sport, just why video games publishers didn't face the same regulation as television broadcasters when it comes to photosensitive epilepsy.

Penrose began his question by stating that his constituent, Gaye Herford, had come to him last year, "telling me that her son had suffered a photosensitive epilepsy attack while playing a computer game."

The game in question was Ubisoft's Rayman Raving Rabbids on the Nintendo DS.

The Tory MP asked Mrs Hodge why it was that TV broadcasters face OFCOM regulations while video game makers do not.

According to Penrose, "A voluntary code currently requires warnings to be put either on the packaging of computer games or, as many of them have, on an opening screen before getting to the main game."

This is apparently not up the same standard as the OFCOM regulation for TV. We took a quick look at the OFCOM guidelines and discovered that it states, "Television broadcasters must take precautions to maintain a low level of risk to viewers who have photosensitive epilepsy.

"Where it is not reasonably practicable to follow the Ofcom guidance, and where broadcasters can demonstrate that the broadcasting of flashing lights and/or patterns is editorially justified, viewers should be given an adequate verbal and also, if appropriate, text warning at the start of the programme or programme item."

This to us looks pretty voluntary as well.

He then, however, brought up the example of one game maker that is taking action.

"A couple of games-makers, notably Ubisoft, with which I have been in contact, have decided voluntarily and admirably to apply the sort of screening that I am suggesting to their games... and I hope that many other games manufacturers will follow their example."

All was not happiness and, excuse the reference, light with Mr Penrose however, as he also told Hodge that, "The point is that some games manufacturers may decide to do that, but there is a huge number of games-makers and manufacturers throughout the world. Some are large and responsible, such as Ubisoft, but as in any industry, there is a large number of manufacturers who are relatively tiny, and although some may be responsible, we cannot be sure."

She picked up on his Ubisoft reference in her response, explaining that, "It is now using the Harding flash and pattern analyser as standard. That is an example on which I hope we can build."

Hodge's basic line, however, was that there is not going to be any legislation for video game publishers in the UK. She stated, "On the statutory safeguards, the General Product Safety Regulations 2005 make it compulsory for producers to place warnings and instructions on all consumer products, including video games.

"I accept that that will not necessarily cover all games producers... Of course, if I am unsuccessful in extending voluntary agreement for a voluntary code of conduct or if we find that it is insufficient, we can always return to the matter at a later stage."

However, she wasn't going to be called complacent and so, "I would like to take the issue away from today's debate and meet with ELSPA ... to see what progress can be made on a voluntary code of conduct."

There's nothing wrong with Penrose's stand on behalf of his constituent - in fact it's admirable especially in the light of self-aggrandising attacks on the industry from the likes of Keith Vaz and Julian Brazier.

However, there is a point at which he appears to have gone slightly over the top. Hodge highlights this in her opening remarks when she states, "The honourable gentleman calls on the Government to make it a legal requirement for computer games publishers to test their products before publication, and to remove scenes that could trigger a photosensitive epileptic seizure."

Our highlighting. Penrose wants this requirement because of the number of people in the UK who don't know that they have got PSE until it is triggered.

Hodge covered the fact that, "It is also important to recognise the distinction that computer games do not cause either epilepsy or PSE—I hope that the hon. Gentleman accepts that—although computer games might trigger a seizure in those already prone to PSE, whether already diagnosed or not."

Hodge also pointed out that, "He is right to acknowledge that more and more people play computer games, although a fact that surprised me may interest him.

"The average age of those who play computer games is 28, so they are not played just by children.

We are at least a little encouraged by the fact that on this issue the UK government appears to be taking the industry more seriously at last.