What happened to Mario & Sonic?!?! 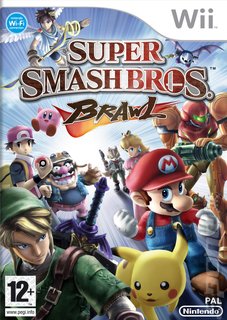 Nintendo takes down Indiana Jones this week in the Charts, with Super Smash Bros. Brawl laying waste to the snake hater's LEGO outing. Smash Bros. sits at Number 1 while LEGO Indiana Jones drops down to Number 3.

Chart-Track tells us that Smash Bros. weighs in as the third largest Wii launch behind Wii Fit and Mario Kart, which this week rest at Number 4 (up from 27, a 643% sales jump thanks to renewed stock) and Number 7 (up from Number 11) respectively.

The other title to take a spot of the wind out of Indy's sales is EA's Battlefield: Bad Company, which blasts its way in at Number 2.

Before we go any further, SPOnG would like to draw your attention to a shocking event that has led some denizens of the SPOnG Underwater Castle to fear that the sun may not rise in the morning and that women could be birthing snakes within the next couple of days. Mario & Sonic at the Olympic Games is no longer in the Top 10. After months of loitering around the top of the Charts, the game has slipped from Number 6 to Number 11. Fortunately for SEGA its other Olympic tie-in, Beijing 2008, has jumped in to replace it at Number 9.

THQ's Big Beach Sports débuts at Number 5, putting the total number of Wii exclusives in the Top 10 at four.

Konami's Metal Gear Solid 4 (on the PS3, if you've been living in a cave on another planet in a parallel universe where people haven't been invented) is the only other format exclusive in the Top 10. It's at Number 6, down from Number 2. Read SPOnG's review here.

GTA IV nearly came a'cropper this week, having just dodged a fall out of the Top 10. It dropped from Number 4 to Number 10. It has, however, hung in there and it's joined by another Take-Two title, Top Spin 3, which climbs from Number 12 to Number 8.

Other new titles in the Charts are Activision's Guitar Hero: Aerosmith at Number 14 and Vivendi's The Bourne Conspiracy at Number 15.

You can see the Top 10 below (last week's position is bracketed).