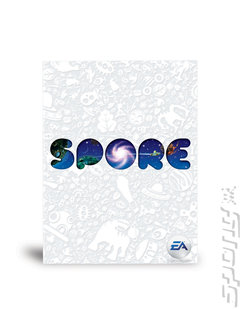 Inside the box gamers will find a 'Making of Spore' DVD, an 'Art of Spore' mini hardback, a fold out Spore poster, a "premium" (EA's word) 100-page 'Galactic Handbook' and a DVD documentary from the National Geographic channel called How to Build a Better Being.

That tidy lot will set you back Ł44.99, while the regular edition will cost Ł39.99. Not a bad package for an extra fiver, is it?

Corporo-quote, anyone? EA's happy to oblige. More specifically Patrick Buechner, VP of marketing at Spore's developer, Maxis is. “The Spore Galactic Edition is the ultimate backstage pass for the Spore universe”, he uttered. “The Spore Galactic Edition is an incredible collection of art, video and behind-the-scenes access to the development team for fans, along with some of the coolest, most collectable packaging in years.”

The trial Creature Creator for Spore was launched last week. If you haven't had a go at making life (of the virtual kind, that is) SPOnG suggests that you do.

If you want to find out more about Spore, head on over to SPOnG's dedicated game page.
Companies: Electronic Arts Maxis
Games: SPORE