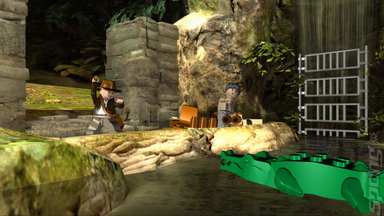 Stand up everybody and can we all please welcome the PlayStation Portable to the UK All Formats (All Prices) Top 10 provided by Chart Track (copyright ELSPA... obv). It comes in at Number 10 with Crisis Core: Final Fantasy VII. Yeah, we started with Number 10 you want to fight about it?

Okay, single-format (PS3) Metal Gear Solid 4 only held its Number 1 slot for a single week, being beaten into submission by multi-format, LEGO Indiana Jones. According to Chart Track, "It’s a case of which game falls by the greatest margin as sales of the LucasArts’ film/toy franchise drop 29% compared to MGS4 which falls by 59%."

This, however, is still more than the Number 3 title, the newly entered and controversial (and litigation-generating apparently) Alone in the Dark (2008) from Atari. This, according to Chart Track had "under half the sales of MGS4 this week" - and it's multi-format.

How, you ask, is the video game equivalent to Bryan Adam's Everything I Do (I does it for thee!!) getting on? Well, GTA IV maintains its Top 5 placing, sitting in at Number 4. Bloody hell! It'll be vying with Number 6's Mario & Sonic At The Olympic Games for the "Do you actually remember when it wasn't in the Chart, grandpappy?" award.

Aside from all those shenanigans, it's largely as you were aside from the re-appearance in the Top 10 of Activision's Guitar Hero III: Legends Of Rock. What, we shout above the longhairs, has become of Rock Band?