Get your boots on... 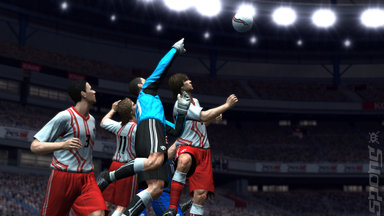 With an interesting European Championship being played out (if you exclude Italy, which Spain just did) soccer-kicking (to the true fan) is still front and centre. So, it's good to hear that Konami is going to pit Pro Evolution Soccer against EA's FIFA franchise once again with PES 2009 in Autumn 2008.

In fact, we hope the PES vs FIFA battle will hot up again with the new release because it's that kind of competition that will - we hope - force quality up and keep prices down.

Apparently, "Konami is already planning a raft of extensive new additions that will further bridge the gap between PES and the real thing," we are entirely unsure how that is going to work unless some form of virtual reality body-kit is packaged.

Jon Murphy, PES Project Leader for Konami Digital Entertainment GmbH says, "We are committed to extending the realism of the new game with a wealth of key gameplay additions, and will produce a football title that truly embodies all the skill and pace that is good about the modern game."

We haven't been told what the additions are as yet - but we're excited by the this virtual reality body suit idea. Bagsy us being Eric Cantona and a certain person from a certain other publication (you know who you are) can be Matthew Simmons.

Joji 23 Jun 2008 11:49
1/3
I hope they've tweaked that engine of theirs. I'll be disappointed if it looks like previous versions plus polish again.

Konami, why not just get the Unreal engine and make these games look like they should (yeah, wishful thinking, I know).

Has anyone noticed how in all these latest fangled versions of Pro Evo and Fifa, none of them have yet put subs (warming up etc), refs and officials on the pitch and sidelines? Is it really that hard to do this in a footy game these days?

so why exclude the Wii this time around? I don't get it.

Joji 23 Jun 2008 23:06
3/3
Oz, Konami are a strange company indeed. Half the time they seem to not know what to do, beyond MGS, Castlevania, Contra and Pro Evo. Pro Evo was always gonna sell on Wii, because the GC missed out on several versions, for no justifiable reason. Its unique controls are a bonus.

I'd be very surprised if Wii didn't get a 09' cut. As for Fifa, I know EA will never miss a buck, but at least they will do a Wii version.

Konami, put MGS aside (as cool as it is) and raise your game in other areas.