SecuROM Hobbled in BioShock - Confirmed for Alone in the Dark

Make your minds up PC publishers! 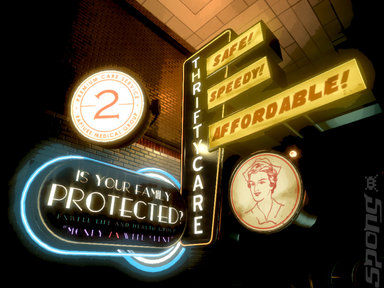 As 2K Games announces that it is removing Sony DADC's SecuROM digital rights management from the PC version of BioShock due to negative comments and reception, Atari announces the opposite for Alone in the Dark.

A posting on 2K's Forum from its Community Manager states, "Good news! As promised, all activation restrictions, including install limits, have been removed from BioShock PC as of today. You don’t have to patch or install anything for this to go into effect for your copy of BioShock – it’s already done!"

This was then followed by, "Our other methods of copy protection remain. You will still have to activate your copy, and you will still need to keep the disc in the drive. SecuROM has not been removed -- just the activation limits on number of installs and number of computers you can install BioShock on simultaneously.

"As I promised that the activation limits would go away, I can promise that if we ever stop supporting BioShock in the ways you speak of, we will release a patch so that the game is still playable. I believe, as you seem to, that BioShock will be the kind of game we will want to revisit 5, 10, 15 or more years from now. I want my copy to be playable, just as you do, and so does 2K."

Then a press release from Atari regarding AitD entitled, "Alone In The Dark PC Compatibility And Security" tells us, "The PC version of Alone in the Dark is protected using SecuROM™ online activation.

"This requires that in addition to the content on the game disk, players download an additional component via an internet connection in order to install and run the game. Once the game has been correctly installed and activated, it can be played whilst offline.

"To install the game on a different computer, players must revoke the serial number when uninstalling from the first machine (this is an automatic option during the uninstall process)."

Sony's SecuROM has already attracted negative comment this year when it was used in BioWare's hugely successful Mass Effect. It has also already been announced that Will Wright's much anticipated Spore will use the digital rights management system.
Companies: 2K Games Atari
Games: Alone in the Dark Bioshock

Once upon a time i had a freind who used to pirate games, not just for himself but for all of his freinds and family, now this guy worked for a large games retail store and used to borrow all new releases on a friday take them home and copy them and return them on monday, PS1, to PC to Saturn right up until Dreamcasts fall, this guy would charge about Ł5.00 a disc (yes a disc not game!) and he would sell about 100-150 discs a week thats Ł750.00 a week, he would spend all day and night in his room (cept for work) "Burning" and a second pc playing Champ Manager 97-98 non stop,

This guy never spent his money as he never went out much add on that his working wage, he was on Ł1000.00 a week Ł52000.00 a year TAX FREE! now the moral of most of these kind of stories is they get caught and lose it all and then go to prison or pay large fines, well it seems that crime does pay! as this guy went on to open his own game store, then the following year another and 6 years in he has now got 5 stores and planning on openeing 3 more next year, he doesnt pirate anymore because it effects his business and is now very hypocritical to the subject!

Piracy pays and as long as it pays it will be there, i have to admit my own personal PS1 was 90% pirated games, and i feel ashamed for that, i feel that i helped take the gaming industry into a slump of having SONY ontop for no reason other than piracy, it would of been a different picture entirely, but now i make up for it i buy every game legallly and no matter how much that R4 i own tempts me i still only play homebrew on it,

Joji 23 Jun 2008 11:42
2/2
Wow! What an interesting story. Food for thought indeed. Very shocking, considering I once worked at such a store, and would occasionally borrow a game to play. The thing is, this same kind of piracy can be done by just renting a game, let alone buying and trading a legal copy in, after copying. Perhaps that's why some are keen to close the pre owned net.

In truth, I believe the vast majority of gamers have used pirated games of some sort, whether they'll admit it or not. The reason I say this, is because we count games that are in print and on shop shelves, but never bare in mind those vastly out of print and unavailable. I'd like to see the games industry take a stand here, since out of print and dead roms aren't a threat, but the piracy of the latest games is.

Piracy unfortunately is a hunchback the games industry will always have, just like every media industry. Combating it is a half hearted affair, with very few victories. Despite how much piracy is said to hurt the industry, I think it hurts more when its out in Asian regions, where such sales of pirated games are rife. When taken online though, that can increase enormously. I'm sure we all value the physical real mccoy overall though. We had better anyway, because if dowloadable games take a hold, we can kiss it goodbye.

Its a bizarre situation for your friend, gone from pirate to established retailer. He's lucky he's not been reported to store x, as what he did could be classed as theft, more so because his copies were for profit and not personal use.

Another angle of piracy that is never talked about, is that of 2D/3D software, the type used to help create games etc. Many artists in the games industry, earned their skill spurs on dodgy copies of certain 2D/3D packages, while again they'll never tell, since those copies were for personal use.

So there's an interesting question here. How much does piracy take, as well as give back to the industry in the long run? And does such piracy really have that much of an impact, when the likes of above go on.

I'm sure you'll find few established industry artist coming forward to admit use of pirated art software. After all, the industry is growing and richer as a result and even bucking the current global financial woes.

Guess we've got to learn to live with piracy, while denying it, because the reality is it only takes one person, not the countless numbers of say those that produce dodgy handbags or football shirts, to copy a game.