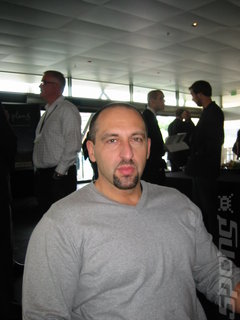 Speaking to SPOnG at the GameHorizon conference in Newcastle yesterday, Satchell said:

“I've been a little confused by WiiWare... The more I look at it, the more I'm confused, because it sort of doesn't really look like something for independents.

"At best it's what we would call a registered developer programme."

He continued, "It's really a way for you to get hold of dev kits and the normal development environment when you're not signed to a big publisher. Which is very different than what we're doing with XNA, which is you can just go and download the tools and we're going to give you a distribution (platform) and the community will manage it.

"We're going to completely enable you, versus 'well, if you kind of work with us we can possibly kind of, back door or grandfather you into some kind of developer programme which is a lot like our professional developer programme'.

"So, I'm not actually convinced it's really going to empower the community a whole bunch."

That's not to say, however, that Nintendo has no desire to support smaller developers. "I think probably they do want to enable independent developers. I don't know how much they're succeeding with that, and I don't know if it's going to be the seachange that I'm hoping we'll see with XNA of really empowering the community”, Satchell said.

Back when Nintendo announced WiiWare, Nintendo of America's President, Reggie Fils-Aime, said, "Independent developers armed with small budgets and big ideas will be able to get their original games into the marketplace to see if we can find the next smash hit."

The service has since been criticised for focussing too much on larger developers such as Square Enix, with one small studio, Xiotex going so far as to claim "WiiWare is a lie" after it was rejected as a developer for the service.

Of course, with Microsoft Games currently pushing its 'XNA Creators Club' - and planning to roll the games out to a wider audience later this year - it comes as no surprise that Satchell would big up Microsoft's XNA Studio at the expense of Nintendo's Wii development program.

Have you any experience of either WiiWare or XNA? Tell us about it in the Forum.
Companies: Microsoft Nintendo
People: Chris Satchell

irritant 19 Jun 2008 11:02
1/10
I've got to agree with Microsoft on this one. Nintendo were making claims that suggested that practically homebrew developers would be able to work on the Wii in the same way they can on the 360 when in reality WiiWare is pretty much for existing "proper / official" Wii developers only.

This isn't a sulky moan from a homebrew coder or a small developer who has been denied developer status, I work for a "proper / official" developer who is working on a WiiWare game. From our point of view it's great that not everyone can get on WiiWare as it means the service won't be swamped with too many games competing for too few sales.

schnide 19 Jun 2008 11:02
2/10
F**k off with your rhetoric Microsoft, if you want to dirty-talk this much then quit the videogame market and go join the Republic campaign. C**ts.
more comments below our sponsor's message

king skins 19 Jun 2008 12:22
3/10
schnide wrote:
F**k off with your rhetoric Microsoft, if you want to dirty-talk this much then quit the videogame market and go join the Republic campaign. C**ts.

Thanks for your insightful post, it was a pleasure to read...

David Armstrong 19 Jun 2008 12:46
4/10
I think Nintendo want to start WiiWare off with a high standard, so obviously their going to stick with the bigger, more trusted developers. As it goes on I think we'll gradually see smaller and smaller developers making WiiWare games.

Horatio 19 Jun 2008 13:07
5/10
New developer Nnnoooo (is that the right name?) are hardly an established developer, yet they are about to release Pop onto the UK (European?) service.

If it were not for a coding bug delay, that game would have been a launch day title and would have shown a more rounded set of developers.

Isn't "Defend your castle" (or whatever it is called) a game from a new developer too?

I agree with David Armstrong, I think Nintendo are aiming to launch with a high standard. Not only that but it is very likely that the truly independent developers will be less adept at making games and will more likely be slower to release?

And Microsoft shouldn't be so quick to mouth-off - the XNA creators club is a great idea and I hope it works out for them, but we've yet to see any of the final products so it could all go wrong for them.

If you like that you should check out my others, you'll love them.

hmmm 19 Jun 2008 14:02
7/10
Well I think it was all a PR pull to say how much cooler XNA is. We'll never know if Xiotex actually had a game that people would want to play. If it's so grand they can try and put it on PSN or XBLA or was it rejected from those two as well? WiiWare has big named developers at launch maybe because they have the employees available to make the games faster then a few people in a garage...

riiiight 19 Jun 2008 23:03
8/10
I wouldn't call Xiotex a studio of any sort. It's one man at his home making flash games at the moment. Nintendo isn't going to give out kits and licenses to individuals working out of their basement, but rather legitimate businesses. Nintendo hasn't done anything to the contrary of what they've stated. Don't be naive.

Get with the times. Seriously the ideal that people can download tools to program is AGES old. In fact it's been done forever and is nothing new. While I understand that Nintendo doesn't offer these tools freely for everyone to use it offers something different in their ideal of "empowering the community."

I'll make it simple for people to understand. Whereas XNA offers the tool to be used, WiiWare offers an entrance into the industry. When you program on XNA you are certainly well and able to complete a game and then hope publishers will pick it up. When you sign on WiiWare you are developing for Nintendo, it is then that you can make your game and then have it sold.

Sure it doesn't make sense the way you put it. But isn't that what writers are supposed to do? Bias a result for one way or another? I think the only real way to look at things is these two companies are offering different approaches to similar goals. And by all means those who choose XNA may very well stick with XNA. But let us not slander WiiWare for attempting to approach with a different method for as history has shown slandering the Wii and praising the PS3/360 hasn't come to much fruition has it.

arajigar 22 Jul 2008 18:02
10/10
I think WiiWar must learn of very big and important game developer companies like VALVE; they released their HLSDK free for all people to make mods with, conclusion ?, HL was the MOST active game ever created for ten years with a hundred MODS, some of them authentic proffessional pieces of software ( counter-strike, natural selection... ). I think they should release it free instead of a person having to be part of a company, no matter what is it big or a homebrew developer.

PS: l have also did a MOD : Zion Warcry for it with the FREE HLSDK.