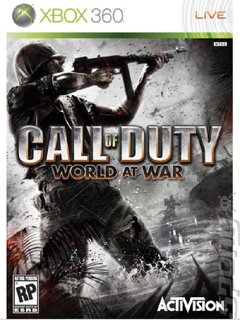 All Images (7) »
It would seem that a leak of somewhat epic proportions has spilled details of upcoming Activision titles out onto the Internet. Please take your pinch of salt... now.

Top amongst those are the Call of Duty: World at War pack shots you see to the right and below. That is not, however, all. Not by a long shot.

Also dished up are supposed details on Guitar Hero: World Tour (Activision should probably get some game titles that rhyme less). The game's new guitar peripheral will apparently take a leap forward in terms of technology. "New touch-sensitive guitar Neck Slide opens up the entire guitar neck for unbound solos - shred how you want", the leaked info tells us. It also names "Jimi Hendrix, The Doors, Foo Fighters, Smashing Pumpkins, Korn, System of a Down, Ozzy Osbourne, Interpol, Muse and dozens more" as appearing in the game. A price of $179.99 (Ł92) was also mentioned for the 360, PS3 and Wii versions of the game with instruments.

Other goodies include Tony Hawk's Huck Jam for the 360 and PS3, which will allegedly make use of a motion-sensing board peripheral.

There's also mention of numerous Marvel Comics games, including Marvel: Ultimate Alliance 2 (which will apparently mirror the events of Marvel's blockbuster Civil War story, with heroes fighting each other), Spider-Man Versus Marvel Zombies (Spidey fighting zombie versions of Marvel heroes and villains), a Spider-Man game that makes use of the Wii's Balance board and pack shots for Spider-Man: Web of Shadows.

Also up there are Forza 3, a game called Wii Yoga, Transformers 2, Scene It? Pop Culture Edition and avatars for Xbox Live.

For more details, head on over to NeoGAF.

As you ponder this hearty lot SPOnG suggests you grab a big ol' handful of salt (preferably rock salt) and apply liberally. The information supposedly came via a marketing company called Intellisponse, but currently links to the relevant information aren't giving anything up. There's perhaps too much that's been posted for this to be made up, but with no way to verify it... well, you know the drill.
Companies: Activision
Games: Call of Duty: World at War Guitar Hero World Tour Spider-Man: Web of Shadows