Axe wielding at its strangest... 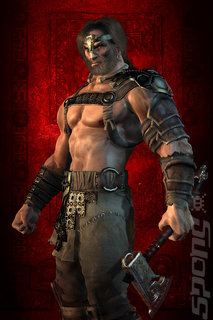 Funcom, the developer of Age of Conan, may just have maybe possibly let slip news of Rock Band II.

The company has just announced the release of the Age of Conan soundtrack. The 'deathpunk' band Turbonegro, which appeared at the game's launch event, are set to appear on the album.

Given MTV's apparent love of Turbonegro (Jackass, Dirty Sanchez, Viva La Bam), the band's appearence in Rock Band wouldn't be too surprising. Of course, the possibility that Funcom has let slip the existence of Rock Band II needs to be weighed up against the possibility that Funcom has just slipped up. We have contacted the relevant people to find out.

It is, of course, extremely unlikely that Rock Band II isn't in development. The Wired website claimed recently to have knowledge of the game, although it remains unannounced.?

As for the AoC soundtrack itself... well, it's an odd beast. It's a two CD release, with the first CD focussing on the in-game orchestral music. Funcom says that the best tracks from the game, as composed and selected by Norwegian composer Knut Avenstroup Haugen. Appearing are the likes of Helene Břksle and a great big choir including members of the Norwegian State Opera Choir.

The second CD is where it gets a little strange. It includes eight further orchestral tracks from the game, bolstered by three tracks by Turbonegro. As we mentioned earlier, the band practices a brand of rock going under the moniker 'deathpunk', something of a far cry from orchestral music...

One of the tracks, dubbed Destroy All Monsters, has been created specially for the album. The track marks the first recording from the band to feature the drumming of their new skin smasher, Tomas Dahl.

The first CD of the soundtrack is already available on iTunes, with the second set to appear there later this month. Retail copies of the album will also become available in June.

For more on Age of Conan, check out SPOnG's recent interview with Andreas Öjerfors, quest co-ordinator at Funcom.

Steviepunk 12 Jun 2008 15:24
1/1
If Turbonegro are in Rock Band II, then that will be a definite purchase for me, I love their music.
Can't say I'm too interested in an Age of Conan soundtrack though, particularly if it's all orchestral aside from the three Turbonegro tracks
Posting of new comments is now locked for this page.