3G iPhone available in the next 'several' months. 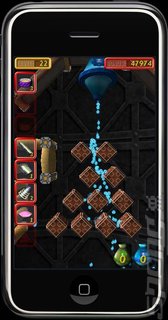 Enigmo
The Apple WorldWide Developers Conference (WWDC) kicked off today in San Francisco with a keynote from Steve Jobs and colleagues. Having made its iPhone software developer kit (SDK) available in March this year with news of games such as Spore and Super Monkey Ball leading the games-attack, today's conference held more interest than usual for gamers.

So, what was shown off today in the gaming sphere? Because there was a hell of a lot of stuff to cheer Apple developers and scare the bejabbers out of Microsoft's mobile team in terms of other developments.

First up, Super Monkey Ball - which uses the iPhone for motion control - is going to be available for less than ten US dollars (about five quid in real money). The last time we saw that on a mobile (phone) platform was on Nokia's N-Gage back in 2003 when it came from Atari and received better than average reviews.

There is, however, no news of Spore from Sims creator Will Wright.

Other games mentioned include, Kroll from Digital Legends Entertainment in Spain. This one apparently took less than a week to port - we would assume from N-Gage as nothing on the Digital Legends site announces any other platform than iPhone.

Also up for gaming are Cro-Mag Rally and Enigmo from Pangea Software. The first is described as follows, "You are a speed-hungry caveman named Brog who races through the Stone, Bronze, and Iron Ages in primitive vehicles such as the Geode Cruiser, Bone Buggy, Logmobile, Trojan Horse, and many others . Brog has at his disposal an arsenal of primitive weaponry ranging from Bone Bombs to Chinese Bottle Rockets and Heat Seeking Homing Pigeons. There are 9 different tracks to race on, and 11 different vehicles to drive."

At WWDC it's described in terms of Mario Kart though.

Enigmo is described as "the ultimate puzzle game for the iPhone/iPod touch! Drag slides and bumpers around to control the flow of falling water droplets to solve incredible 3D puzzles!" We'll forget the 'ultimate' word and continue.

So, right now, video gaming's not the leading tool for the iPhone. One thing and one thing alone kept being reinforced to the devs though - and that was the speed at which a game could be developed for the platform. The constant factor was 'days' rather than 'years'.

Well, we'll stop actually as that's about it in terms of video game content from the show. You might like to know that there was some news about a new 3G iPhone becoming available next 'several months' as well.

deleted 10 Jun 2008 17:27
3/3
SuperSaiyan4 wrote:
Do you mean that update that cost early iTouch owners Ł14.95 to upgrade with the new widgets? If you mean that one I already have the latest firmware infact I think I am on 2.4

sorry what i mean is the iPhone 2.0 Firmware which will be prob 3.0 for iPod touch owners.