Ninja Gaiden II can't beat any of them 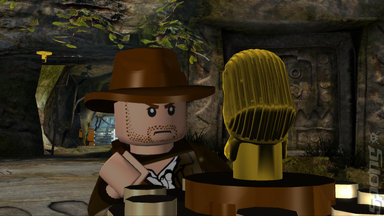 Rumours and hatred last week that GTA IV was 'bricking' Xbox 360s and PS3s add a touch of 'ouch' to the fact that the game saw a 44% drop in sales to be beaten into second place by the truly brickish, Lego Indiana Jones: The Original Adventures from LucasArts ( see our Mark's take on it, here).

That said, GTA IV did manage to make what our American buddies might call a 'super-impressive' five weeks at the top of the All Format/Full Price chart - compiled by Chart-Track and copyright ELSPA. While Indy's all around fun and family goodness (and bloody great movie backing) did enable it to outsell Niko and his cohorts, we don't seeing it hanging on at Number 1 for over a month.

When we say that GTA IV got the Number 2 spot, we mean by a hair(trigger?). It was chased hard and probably bullied by Codemasters’ Race Driver: GRID (see our Marcus' take on it right here) - despite the racer dropping one place from last week.

So, what of the much anticipated Ninja Gaiden II (see our Evil Editor's take on that one, here)? According to the data, it could only make Number 3 in the Xbox 360 Chart being beaten by GTA IV and Indy. It stumbled in at Number 6 in the All Format/Full Price chart.

Now, last week's chart was all about no new entries and packs being shuffled. So, what exciting movement is there this week? Well, it's about as exciting as a movement in the gents at an old people's home to be frank. We've already mentioned the two new entries (Indy and Ninja Gaiden II). Aside from those, the Top 10 remains untouched by any nasty newness. See for yourself at the bottom of this tale.

What of next week? We believe that some solid snake simulator or an engineering game.... okay, let's see if the Sony PS3 fans can elevate Metal Gear Solid 4: Guns of the Patriots higher up the Chart than Number 6. Bearing in mind that it also needs to sell some PS3s along the way, we're going to be fascinated by next week's results.

SuperSaiyan4 10 Jun 2008 15:43
2/2
Ninja Gaiden 2 is too hard for many and are scared of playing a game of that difficulty oh well there loss.
Posting of new comments is now locked for this page.