Metal Gear Solid 4 Friday Round Up 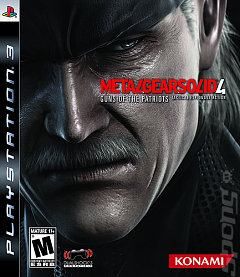 Standard Edition
With only one week to go until Metal Gear Solid 4 finally lands on shelves worldwide, the Interweb is positively rumbling. Konami has denied that the game has 90-minute cutscenes, the exact review restrictions the publisher put in place have been revealed, we've been told there's a pleasant surprise in the works and Konami has pledged that the game's street date won't be broken. Read on for a round up.

So, first up ? those pesky 90 minute cutscenes. Claims that they exist are, apparently, a ?gross exaggeration?. (Warning - very mild spoiler ahead).

Clarifying the situation the game's assistant producer, Ryan Payton, said, ?I'm surprised nobody has stepped forward to debunk this rumor. There are no 90 minute cutscenes in MGS4. The ending is long, but 90 minutes is a gross exaggeration. And here I thought gamers liked long endings!?

Presumably he's surprised that no one from Konami or Kojima Productions has stepped forward to debunk the rumour. Payton certainly can't mean members of the games press, as he cleared up exactly what restrictions Konami put on reviews of MGS4 and the reason no one in the media has definitively squashed the rumour is pretty clear.

On the list was - install times, length of cutscenes (particularly the ending), the number of environments, the opening cinematic, product placement and half a dozen story-specific points. The first two points in particular have raised a bit of a furore, with EGM having refused to review the game under those conditions.

However, Payton has now revealed that MGS4 requires an eight minute initial installation, followed by, "two to three-minute installs between acts." He has also benevolently said, "I want to make it clear that, from today, reviewers are welcome to discuss the length of the cutscenes and install times, but we ask that they not get too specific about the cinematic times and what happens in later install sequences." So... the length of the cutscenes can be discussed, but not too specifically? PSX quotes Payton as saying critics "are more than happy to comment on whether they're too long or short." SPOnG assumes that what was meant is that Konami is more than happy for reviewers to discuss how they feel about the cutscene lengths.

On a happier and less controversial note, Payton also said ?Believe it or not, I've been so busy working on a special surprise for MGS4 buyers (that not even those who have leaked copies of the game can spoil! Haha!), that I haven't had time to catch up on most of the pre-launch excitement.? Feel free to speculate on just what the surprise might be in the Forum.

Word about the launch has also come from the UK general manager for Konami, Pete Stone. He says that the street date will not be broken, as has happened with other high profile titles. ?We pride ourselves on working closely with retailers and have a continuation of the signed agreement system we used so successfully before?, he said. ?All major retailers are supplying written agreements that they will honour the street date no matter what, making it a level playing field across the board. We all want the game to be a huge success, and for everyone to benefit from this release.?

While Konami might succeed in keeping the game under wraps at UK retailers, it's too late to stop it from making its way into the public domain via other outlets. Specifically, at least one copy has made it out of Australia.

Stone also pledged that Konami will be able to meet customer demand, saying, ?With demand for MGS4 at such a high level, I am delighted to confirm that we are continually manufacturing stock to meet the phenomenal demand. We want to make sure that everyone gets a good allocation of what is the key PS3 title of the year.?

Just one week left to go... You can find out more about Metal Gear Solid 4 on SPOnG's dedicated game page.