The most embarrassing moment... 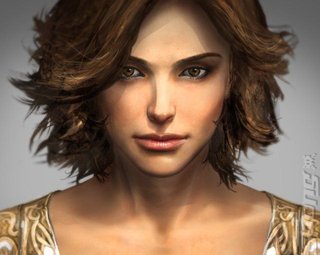 Ubi' is hitting the casual market in a big way. It's also understood that Rabbids just work. Wargaming on land and air remain corp (sic) to its franchise list... and we weren't bored to death by figures. So, in short order, here are the highlights of day one's keynotes.

Far Cry 2 - set in Africa, with the addition of black journalist called Reuben's voice over. Graphically very, very impressive in this PC demo using the Dunia Engine. Strangely, despite the voice over, the demo showed a player FPS'ing his way around the 50km environment with his map and compass as a white fella. We were also told that, "These are real simulated trees", which was a little confusing. Still, it looks like an elegant shooter set somewhere other than a dystopian European or American future.

Shaun White Snowboarding - no in-game footage but Shaun seems to be a very nice bloke indeed. We're due for a good next gen snowboarding game, and at least one of the SPOnG staff is very excited about boarding on snow like Shaun. The game apparently uses the Assassin's Creed engine (which we were expecting for the new Prince of Persia, but more on that later), so read PS3 and Xbox 360 at least.

You don't even start off as a prince!

What it is to do with is a lovely looking lady cross between Keira Knightley and Natalie Portman called Elika. Elika looks lovely - as you would expect. She is also your AI buddy. We're not entirely sure why. But what we are definitely sure, according to Ben that, "Elika is not going to be a burden. Players are not going to be dragging their heels and getting frustrated. She will always be a positive. Not only is she making the game better but she's not making the game worse, which is of course very important to us."

Raving Rabbids 3 (aka Rayman Raving Rabbids TV Party) - Wii using your bottom on the Balance Board. Yes, Wii bum boarding. This comes with 65 mini games its rips off television, music and movies and will appear on Wii and DS. We saw a rabbid called Jean Claude Silly presenting a rabbid using a bison (possibly a cow) flying down what seemed to be a bob-sleigh course doing tricks. It cheered the hell up out of us. We also saw a dance game (Dancing With Dweebs) featuring Wii controllers and balance boards to the music of KC and the Sunshine Band with four players. This will sell lots and lots and lots of balance boards.

Beyond Good And Evil 2 - we saw a gorgeous trailer (some poor smoke particle effects though) featuring an enormous pig in a desert swallowing a fly with this nose. An impressive tech demo to say the least. The trailer also featured the only sight we had of anybody called Jade (the heroine of the previous game) sitting behind said hog.

Now, there was more - and there will be hands-on reports of the, well, hands-ons. So keep in touch for those. Before we get back to it, however, here's our nomination for "What not to do in Paris with video games journalists".

Brothers in Arms: Hell's Highway's military advisor is the bullish and retired US army Colonel John Antal. He pops up and enthuses about his franchise all over the world. Remember, this event occurred in Paris. Parisians are not the biggest fan of US military activity nor or being reminded of being liberated by... the US army in WWII.

So, when Antal decides to sell his video game by referring to a text from an old pal of his who fought in the biggest war of his generation 60 years ago (1948? Korea?), well, skins started to crawl a little. When he asked his old mate how to sell his game to the Europeans he was given a moving speech to speak in order to sell his video game. This was then polished off with trying to get a bunch of booze-concentrated video games journalists and retailers to repeat the following as a message for his old friend back in the USA. He attempted to get that crowd screaming, "Everyone fights! No one quits! Always attack! Oraah!" He tries this twice. He then leaves the stage without actually saying the words, "Goddam cheese-eating surrender monkeys!"

Anyway, aside from that Ubidays is shaping up to be an impressive event. More hands-on detail later.