But don't expect it too soon 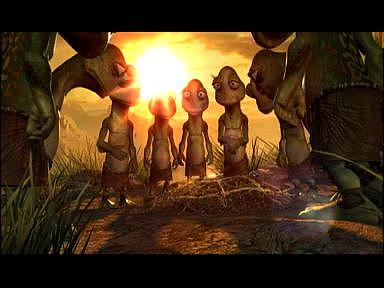 Screen from Stranger's Wrath
Jeff Braun, the man who co-founded Maxis with Will Wright, has confirmed that he is working with Oddworld Inhabitants on a new Oddworld game.

Speaking at Wilfrid Laurier University in Canada, Braun said of the team, "They're such a talented group of people and I really trust their ability to create compelling content." He said that the upcoming game will have a cinematic quality on a "one to one scale" with CGI-based films.

Braun praised the quality of the tools now available to devs. "The rendering tools are getting so good now for 3D animation that you can literally create a linear animation and create a video game using the exact same objects.... The tools are finally getting to the level where we can come out with a show and we can come up with a game", said Braun.

Braun apparently hinted that the next Oddworld game could be episodic.

The news may come as a surprise to some, as Oddworld Inhabitants supposedly retired from the games industry in 2005 to work in film on a property called Citizen Seige. The studio's co-founder Lorne Lanning savaged the games industry, criticising an Electronic Arts business model that he said saw no marketing resources put behind Oddworld: Stranger's Wrath because it wasn't multi-platform.

No platform for the upcoming Oddworld game has been announced and Braun said that a slow production schedule could make it "years" before the game sees release.

ninjaraiden2003 23 May 2008 16:41
1/7
YES! There is a video game god that listens to peoples prayers! I've loved each and every Oddworld game right from the start, granted Munch's Oddysee may not have been the greatest game in the world, but I've loved the entire series and always hoped for the fifth (and final?) of the originally planned Quintology! Extremely happy, next world Oddworld yeaaaah!

Modhabobob 27 May 2008 16:06
3/7
Loved Strangers Wrath, disgusted they didn't make that title backwards compatible (along with Otogi 1 and 2). Glad to hear they are coming back.

D-Man 6 Jun 2009 04:41
4/7
Regardless of what Mr. Lanning feels about the lack of advertising, not having anything after Abe's Exoddus on PC alienating a large section of fans. In this dan and age you have to go multi-platform or you'll suffer badly.

what? 29 Dec 2010 21:21
6/7
as long as it sees a PC release it should get SOME advertising in the form of steam. after all, the oddboxx probably got some people's attention. and didn't game informer do an article a few years back interviewing lourne? i mean, that amnesia game only saw publicity because of steam.

what? 29 Dec 2010 21:22
7/7
as long as it sees a PC release it should get SOME advertising in the form of steam. after all, the oddboxx probably got some people's attention. and didn't game informer do an article a few years back interviewing lourne? i mean, that amnesia game only saw publicity because of steam.
Posting of new comments is now locked for this page.