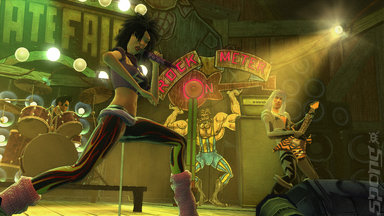 All Images (8) »
Activision, Red Octane and Neversoft have 'revealed' Guitar Hero World Tour in a video. Calling it a 'reveal' trailer seems a bit disingenuous, since what the video actually shows is a fake and sterile looking concert with the band all playing Guitar Hero instruments, so there's not really anything of the game in there. Still, there's a girl shamelessly made up to look like Avril Lavigne, so that's something.

Fear not though! SPOnG also has some screens and a render of the drums which are perhaps a little more telling about what's actually going on in the game...

Yes, drums. If you hadn't heard already, drums and a mic are to be included in the next big instalment in the Guitar Hero series. You can read all about it, along with the extra goodies to be included, here.