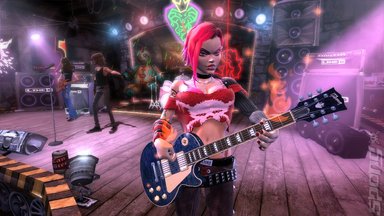 Activision has dished up details of the next 'proper' Guitar Hero game ? World Tour. In a move likely to shock absolutely no one, the publisher, along with its partner Red Octane and developer Neversoft, has opted to include the option to play other instruments.

As well as a ?slick newly redesigned guitar? (possibly without Gibson branding, after the lawsuit hoopla) there will be a drum kit and a microphone, allowing four players to jam together.

Also new to the series will be an eight-player ?Battle of the Bands? which will allow two bands to face off against each other online.

Beyond that, we've got a 'Music Studio' which will enable players to create music from scratch then play it in the game, as well as share it online.

SPOnG hopes that one of those features is what Activision was referring to when it said the next game would feature a ?leap forward in innovation?, since the inclusion of other instruments was something of a no-brainer following Rock Band (which launches tomorrow in Europe on the 360).

Activision promises that the new game will include the ?largest on-disc set list in a music-rhythm game to-date?, the entirety of which will be master recordings. Van Halen, Linkin Park, The Eagles and Sublime are all named as being on there.

Back to the drum kit, and Activision is claiming it will provide the ?most realistic drum experience ever in a video game?, with the kit featuring ?three drum pads, two raised cymbals and a bass kick pedal, the drum controller combines larger and quieter, velocity-sensitive drum heads with soft rubber construction to deliver authentic bounce back and is easy to set up, move, break down and store.?

The Wii version will be the first iteration of Guitar Hero on the console to feature in-game downloadable content.

The game is slated for release on the PS3, Xbox 360, Wii and PS2. The PS3 and 360 versions will see Neversoft return to the series for development chores. Vicarious Visions and Budcat will return for the Wii and PS2 versions respectively.

Si 28 May 2008 08:42
2/2
The Gibson lawsuit was against the publishers of Guitar Hero 1 and 2 who didn't obtain the rights to the Gibson brand. Guitar Hero 3 is fully licensed.
Posting of new comments is now locked for this page.