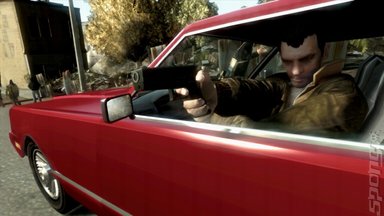 GTA IV has achieved another week as the All Formats Chart topper, despite a 41% drop off in sales.

Wii Fit has similarly held on to Number 2, but its sales have dipped by 52%. The top two games see the largest sales drop.

The Easter sales boost seems so far off now...

The biggest climber this week is Mario Kart Wii, with renewed stock giving it a boost up from Number 9 to Number 3. Wii Play marks the third Top 5 title for Nintendo, although it drops from Number 3 to Number 5.

A look at the Top 40 as a whole shows Nintendo dominating with a cuddly iron fist. Half of all the titles in there are Nintendo format exclusives, while a further eight releases are doing their best business on Nintendo platforms.

SEGA still has two games in the Top 10, with (you'll never guess...) Mario & Sonic at the Olympic Games holding on at Number 4 and Iron Man dropping from Number 5 to Number 7. This week Konami's Pro Evolution Soccer 2008 gets budget versions, giving it a nudge up from Number 7 to Number 6.

A handful of games make their first Top 40 appearances this week, despite three of them having been released two weeks ago. Disney's High School Musical: Work This Out! for the DS is the highest at Number 14, while Electronic Arts' and Steven Spielberg's Wii collaboration, Boom Blox, enters the Charts at Number 21. Rounding out the late comers is Warner Bros.' film tie-in, Speed Racer for the Wii and DS, at Number 37. The only brand spanking new Chart entry this week is Eidos' Top Trumps Doctor Who for the PC, PS2 and DS at Number 22.

There are a few big releases set to hit this Friday, so keep an eye on next week's Charts for EA/MTV/Harmonix's Rock Band, Haze from Free Radical and Ubisoft and Age of Conan from Funcom and Eidos.

You can see the Top 10 in full below (last week's positions are in brackets).