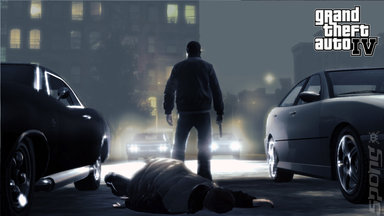 Microsoft has denied the possibility that the Grand Theft Auto IV exclusive DownLoadable Content (DLC) it is paying an arm and a leg for could make it onto the PlayStation 3.

Speaking in an interview, Aaron Greenberg, director of product management for Xbox 360 and Xbox Live, responded to a question regarding 'a Sony exec' stating that the Xbox 360's exclusive content coming to the PS3 as follows:

"It's not possible as far as I'm aware, but that would be a good question to ask Rockstar. Rockstar and Xbox have only said there are exclusive episodes coming this fall to Xbox 360. I might put that up for a bit of wishful thinking on their end."

By 'them', of course, he is referring Sony. More specifically he's referring to David Reeves, president of Sony Computer Entertainment Europe.

When Reeves was asked, "Is it damaging to Sony and PlayStation that there is no DLC for GTA IV on PS3?", he responded, "Well I think you probably will see it, it's just that a deal obviously was struck between Microsoft and Take 2 to do that. And if that's what they want to do, I think that's the last shot they have."

A couple of questions are left hanging by Reeves' comments. Does "it" refer to the 'exclusive' episodic content?

No - that would be insanely contract-breaking. As Sony's VP of product marketing at Sony Computer Entertainment America, Scott Steinberg, pointed out Microsoft "spent the GNP of several small Latin American countries to get (it)". That GNP by the way is $50m.

More realistic is the suggestion that items like new cars and weapons might be made available as DLC. The availability of such content on the PS3 might not violate the Microsoft/Take Two deal and could be what Reeves is referring to.

What, exactly, does Reeves mean by "that's the last shot they have"? The last shot ever at winning the console wars? The last shot of GTA IV content? What?!?! Unless Reeves knows something we don't about Microsoft ceasing to bother with GTA in future that is.

Probed further, Reeves became evasive, saying, "I'm honestly not going to make any comment on that because it's too big a thing to... we can make an announcement when we make an announcement." He also said, "e-mail Rockstar, ask them what's coming". Since Greenberg also passed the buck and said this is a good question for Rockstar, SPOnG contacted Rockstar.

When Rockstar doesn't comment on rumour and speculation, we'll let you know.

Also read the About Us page recently, and thought it was quite groovy Tim Smith was also another ol' Amiga Format-ter. ^_^

GreenFox 17 May 2008 05:03
2/12
Well isn't Sony getting an exclusive RockStar title? Could that be it? Oh well, if you look at the charts, I don't know why Sony is having such a big head. Microsoft is a big company and they have said in the past that even if Xbox360 does as bad as Xbox did, they'll still make another one... the war will not end with this generation, and video games will see another golden age (this one fulled by the corporate war machine.
more comments below our sponsor's message

Yeah, well, it's quite likely PS3 will get dlc too, even if it's not the same content that's exclusive to 360.

I still had a hard time trying to tell my mate about GTAIV on X360. He seemed to think he had to buy a PS3 to enjoy it, and there are tonnes of casual gamers who aren't in the know about the DLC, and still associate GTA primarily with Sony, and use it as an excuse to purchase the machine.

There's a chance the X360 & GTA adverts may have changed the public's perception a bit, and it's good to see X360 in the lead with GTA sales, but 360 still has a larger installed base for the time being. In the long term, the PS3 could still overtake though, both in installed base, and in GTAIV units sold.

fanpages 17 May 2008 21:15
5/12
Following Take-Two's initial rejection of Electronic Art's tender to acquire all of the outstanding shares of common stock at 26 USDs per share, Sony Computer Entertainment may well have put forward a fair better bid at the end of April 2008 when Take-Two?s share-holders were willing to listen to other offers.

They may have even offered a complete buy-out of Take-Two, but if "Sony" now have a controlling share, I very much doubt any more Grand Theft Auto franchise titles will ever be made available for the current Microsoft video games platform.

Until the deal is legally recorded, David Reeves obviously cannot make (or would want to make) any details public in case the comments give Microsoft a similar opening (now they have loads of unspent funds previously allocated for Yahoo!).

Maybe in the '50s; he needs to recalibrate his inflation meter. I mean even Cuba alone has $50 billion of GDP (GNP is even higher since it's GDP + the income of citizens living abroad). And yes, Mr. Steinberg, I'm sure you did used to be able to buy a bag of candies for a penny. But these days it's "the GDP of 2 or 3 small island nations whose only exports are novelty stamps for stamp collectors" (but you better hurry to use that before they're eaten by the rising oceans): https://www.cia.gov/library/publications/the-world-factbook/rankorder/2001rank.html

Also read the About Us page recently, and thought it was quite groovy Tim Smith was also another ol' Amiga Format-ter. ^_^

The guys a Rock Romantic in my book ;-)

XBOXER 22 May 2008 16:41
8/12
Hmmm I think that we could see a whole new story featuring a new main/playable character arriving via a DL episode :)
I think PS3 will get DLC in the form of new cars weapons mini games and maybe even new characters to get missions from, but the xbox version will feature a whole new story to be played on the current map with a new section of the map added....

darkpower 27 May 2008 08:05
9/12
Hmm...wasn't this the same guy that was bragging that it would be the size of San Andreas and Vice City in map size and that? Wasn't this the same company that tried to get away with saying the multiplayer was exclusive to the 360? And weren't they burned already with the latter? Isn't this article taking MS a little TOO much on their word? And why is this thing about a contract still up in the air? Isn't MS trying to sell consoles and their version of the game, and would they

Rockstar never said anything about this, and I'm quite sure what they said about PS3 DLC in recent months (about how they want the game to last for years and everyone except those that are taking MS TOO much on their word are saying something completely different) certainly told the story. The two episodes are exclusive, but that doesn't mean they can't make anything similar for the other console (just not a port at present time).

Again, I'd take Greenberg's words with a grain of salt. Him and the rest of the MS team have really not learned when to keep their mouths shut about the game, and have said MANY things that are untrue. Don't believe what they said too quick. It sounds like the Sony guy has been having his head on more straight than the MS guys have been.

johnis187 29 May 2008 14:55
10/12
OK i think people should check the back of the playstation 3 box of GTA IV the box says very clearly network features and in a seprate box it says network players i see that as 2 different things however the thing we need to remember is that GTA was supposed to be released on blu ray giving it 10 times more depth and more features however the x box 360 disc couldn't capacitate for it meaning the playstation 3 had to suffer delays due to the 360's fault with game space on the discs.

*finds key of anti-stupid door in his pocket*

oops...my bad...
Posting of new comments is now locked for this page.