This hot new title will keep us happy until Perfect Dark 2. 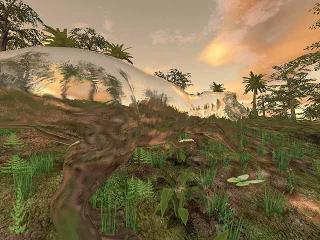 All Images (5) »
Ok, this game is a first-person shooter, on the GameCube and it features both human and dinosaur enemies. It’s Turok, right? Wrong, it’s X-Isle from little known German developers Crytek and it is another fantastic looking GameCube title. We just can’t get enough of it.

Right, listen to this for a story line: Some dinosaurs lived through the extinction that befell the planet all those millions of years ago. These beings have become quite clever and had managed to hide their existence on a small island in the Pacific with the use of a cloaking device. Sick of hiding, these beings uncloak their island and the UN send in some troops to investigate.

The troops go missing, so the governments of the world’s superpowers call on you and your team of elite soldiers to enter the island, find out what’s going on and rescue the UN soldiers.

The world in X-Isle is split into five different islands. On each island you must first locate the leading UN office that will give you between three and six mission objectives to complete. Once the objectives have been cleared, you progress to the next island.

“The goal is to survive while completing specific mission-tasks. It is like a real interactive cinematic experience combined with deep immersion and innovative gameplay,” said a Crytek developer.

The game also comes equipped with one other very interesting gameplay option: multiplayer. The game’s creators have been eager to stress the multiplayer aspects of X-Isle and have been most impressed with the amount of options afforded the game and the genre by the GameCube’s pad.

There are no details on the format of the multiplayer games at this time but it is likely that X-Isle will be the first shooter to put the GameCube’s online promises to the test.