No Lips. No Ninja Blade 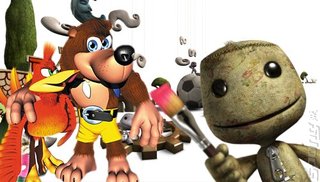 We're just having some fun here is all.
As its Gamers Day kicks off in San Francisco, Microsoft has released information regarding the next Viva Pińata (this one's called, Trouble in Paradise), Fable 2, Too Human and Banjo-Kazooie: Nuts & Bolts.

What hasn't been released, however, is news relating to the rumoured 'Lips' device nor the apparently leaked Ninja Blade game.

Banjo Kazooie 3 has also been confirmed as Banjo-Kazooie: Nuts & Bolts. As suggested yesterday, it's not a racing game, it is in fact "a 3-D adventure game". And it is due out in November.

Although we thought Rare was developing the title, apparently "Microsoft Game Studios is breaking the rules of traditional platformer games by putting the power to invent new abilities for Banjo directly into the players? hands.

"By using their ingenuity to build imaginative vehicles that can be combined with infinite variations, gamers help Banjo successfully complete missions through multiple terrains.

"Through exploration, discovering hidden secrets and solving puzzles to win rewards, players will continually find increasing ways to customize and improve their contraptions, creating an unprecedented level of user-generated content and emergent play for a 3-D adventure game."

Hold on a second there - doesn't "build imaginative vehicles that can be combined with infinite variations" and "customize and improve their contraptions" and "user-generated content" all sound a bit, well, like a take on the LittleBigPlanet idea for the PlayStation 3 and PlayStation Network?

Probably it's just us...

The long-awaited Too Human "action game with integrated RPG elements", developed by Silicon Knights, "will be available on August 19 in North America and August 29 in Europe."

The latest from "sleeper hit", Viva Pińata, confirmed as Trouble in Paradise from Rare is coming sometime in September although no date has been confirmed. Additions to the VP formula include a "'Just for Fun' setting (that) makes getting into the game fast and easy".

There is also going to be the opportunity to, "collaborate together on a garden through a rich co-op experience, connect and play with others online via Xbox LIVE as well as instantly introduce new pińata species to their garden through an innovative new feature utilizing the Xbox LIVE Vision Camera."

Yeah, we know it's us being pernickity (but, we like to think, not pernicious) but how else can you collaborate if not 'together'?

Fable 2, the sequel to... no, we won't insult your intelligence, from Peter Molyneux's Microsoft-owned Lionhead Studios. Yes, there is new on this too. It's world will be 10 times the size of, oh here you go, Fable; it will be "beginning this holiday", by which we assume MGS means, "On sale this Christmas". As Xmas now starts anywhere after August Bank Holiday, we'll leave speculating on the actual release date until its confirmed.

Next! Well, Ninja Gaiden II from Team Ninja - and due out June 3 in North America and June 6 in Europe - gets some pre-emptive stuff with, "Gamerpics packs that include five new images each, at 100 points per pack; and Themes, which focus on heroes and bosses, are 150 points per pack", all downloadable from Xbox LIVE.

Finally, Penny Arcade Adventures: On the Rain-Slick Precipice of Darkness, Episode One is coming to Xbox LIVE Arcade on May 21, 2008. It is an RPG-Adventure 'experience' based on the popular Web comic from Mike 'Gabe' Krahulik and Jerry 'Tycho' Holkins, game designer Ron Gilbert and producers at Hothead Games.

It "results in a 100-percent authentic Penny Arcade experience" - we have no idea what that is as our experience of the Penny Arcade online comic is to laugh a very great deal indeed while reading it.

The Microsoft release pays off with, "Stay tuned for more announcements in the coming months." What? No news of the definitely, absolutely, the Internet told me, Lips device and Ninja Blade game? Yes, that's right, there is no news on those... yet.
Companies: Microsoft
Games: Too Human Viva Pińata: Trouble in Paradise

deleted 13 May 2008 20:14
1/3
In this day and age of the home console, name one thing tha tpretty much hasnt already been suggested or implimented or copied from one to another, even 10/10 games (GTA4) copy whats good and bin whats bad, so in conclusion yes Banjo Threeie! does sound a lot like its nicked some crap from LBP

Spong could you please see when the demo is coming out? The developer said quite some time ago there will be a demo 'soon' hopefully its release sometime within the next week.