Xbox versus PS3? You want to know 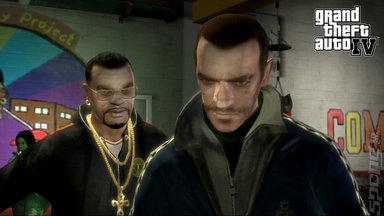 The fact is that most video games do their best business in their first week. Well, that was the fact - unless you look at something like Wii Fit and Wii Play, which sit at Numbers 2 and 3 respectively in the All Format Chart this week.

The fact takes another hit when you notice that the dual-platform GTA IV retains its top spot in its second week on sale. However, as our headline states, the 'most sales in Week One' fact still stands. The game has taken a huge sales hit - some 77% according to Chart compiler Chart Track. A drop like that, however, still sees it outselling the single-platform Wii Fit by a huge ratio of 4-to-1.

Rockstar's game has also broken the one million sales mark in the UK. A remarkable achievement in two weeks of sale for any form of popular culture.

So, how do both GTA IV platforms compare? What's the actual, third-party audited information? Well, according to Chart Track, "the Xbox 360 version widens its sales advantage over the PS3 version by accounting for 62% of sales this week compared to 55% last week."

We are attempting to get unit sales data to bring you.

GTA IV - as expected had a more dominating effect on the Charts than simply coming top by a long way. Aside from SEGA's movie-supported Iron Man: The Official Video Game which popped into the Top 10 having sat in at 11 in its first week on sale, no new releases bothered to enter the Top 40 - let alone the Top 10.

The influence of Niko Bellic therefore ensured that no publisher - without a movie to support its release - in its right mind put out new product. Well, no publisher expecting to achieve a high chart placing.

It's going to be interesting to see how GTA IV performs on Week Three given the fact that it can drop three quarters of its Week One sales and still rule the roost. This is even more interesting when you realise that other publishers appear to see that Week Three as 'safe' or at least 'safer' for new releases.

Free Radical/Ubisoft's Haze on PS3; Final Fantasy XI: 2008 Edition on Xbox 360 and PC; EA/Harmonix's Rock Band on 360 versus THQ's Battle of the Bands on Wii are all due to make their appearances on May 23rd.

We live in interesting times...

The Top 10 All Format Charts (courtesy of Chart Track and copyright ELSPA) appear below with last week's positions in brackets.

See even more detail over here.