BioShock Gets Pirates of the Caribbean Movie Director

Also Gladiator writer; you can't have it all. 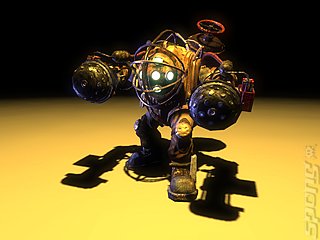 BioShock is getting the Hollywood treatment. 2K Games has said that Universal Pictures will develop a film based on the watery Microsoft-platform exclusive shooter.

The film already has a director attached. Gore Verbinski, who directed the Pirates of the Caribbean trilogy, will handle directing chores. John Logan, the Acadamy Award-nominated writer of Gladiator, The Last Samurai and The Aviator, is in talks to serve as scribe on the project.

Strauss Zelnick, chairman of 2K's parent company, Take Two, said, "Our ability to attract a major studio and unparalleled creative team speaks volumes about the strength of our BioShock franchise. It also demonstrates how Take-Two is delivering value based on our strategy of creating and owning our industry's most powerful intellectual property." Is it just SPOnG, or did that sound suspiciously like yet another salvo in the ongoing Electronic Arts/Take-Two takeover saga?

Christoph Hartmann, president of 2K Games, seems pleased with the whole thing. "BioShock fans appreciate the depth and complexity of the game, and our partnership with Gore Verbinski will introduce the world of Rapture to an even wider audience?, he said. In addition to his impressive body of work, Gore is an avid video gamer and true fan of BioShock. That was extremely important to us in deciding to move forward with this project."