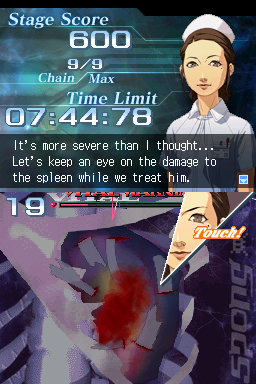 All Images (6) »
SPOnG is doing its damnedest to get over its fear of surgery. We're worried, however, that these latest screens from Trauma Center 2: Under the Knife for the DS aren't helping.

We eagerly pored over the new screens when they came in, hoping that Dr. Derek Stiles' and Nurse Angie Thompson's competent demeanour would inspire confidence in us. Seeing what looks suspiciously like a pentagram on a couple of the screens, however, did not help...

Trauma Center 2 deals with the aftermath of the GUILT virus, which players battled back in the first medical sim in the series. You can find out more on SPOnG's dedicated game page.
Companies: Atlus Nintendo
Games: Trauma Center: Under the Knife 2

Joji 6 May 2008 21:39
1/1
The pentagram does have a meaning of health in ancient greek mythology, as well as other more pagan meanings, we are more familiar with.

This is probably why its used in a game normally known as Caduceus (name for the staff Hermes carried), another greek symbol adopted by most modern medical institutions.

Enough of my 'big head history hour', hurry up July, I want this game.