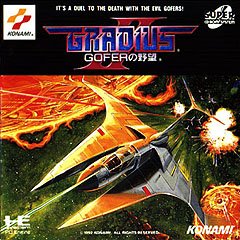 Nintendo has brought the Hanabi Festival, which offers up games never released in Europe before, back to the Wii.

To kick things off, we have Gradius II Gofer No Yabou, Columns III: Revenge of Columns and Final Soldier.

Gradius II Gofer No Yabou first saw the light of day in Japan on the Turbographx back in 1988. It is, if you hadn't guessed, the sequel to Gradius. It's all about side-scrolling shooting action, as the Bacterion Empire launches a fresh wave of attacks. You can get it for 900 Wii Points.

If you'd rather do something a bit more pacifistic, Columns III: Revenge of Columns might be more up your street. Originally released in the U.S. in 1994 for the Mega Drive, it's... well, like Columns, but with extra attacks to throw at your opponents as you try to make your stack of jewels disappear. Nintendo also tells us, ?In Columns III, special magical jewels are available that influence the game in numerous ways such as raising your opponent?s crush bar or lowering yours, adding an extra element of strategy to the game.? It's yours for 900 Wii Points.

The last offering in the Hanabi Festival line-up this week is Final Soldier from the Star Soldier series. It's another burst of sci-fi shooter action. This time, you'll be scrolling vertically, as you hurl laser fire, flamethrowers and missiles at your opponents. Originally released for Turbographx back in 1991 in Japan, Final Soldier will set you back 700 of your Wii Points.

This week's releases bring Virtual Console's total number of titles to 212. Over the next few weeks of the Hanabi Festival, expect to see Puyo Puyo 2 and Gley Lancer from SEGA and Star Parodier and Cho Aniki from Hudson Soft, among others.
Companies: Nintendo
Games: Columns 3 Final Soldier Gradius II: Gofer no Yabou