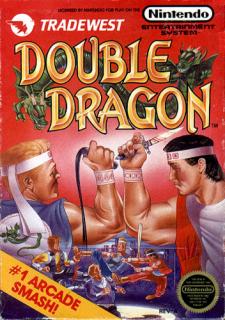 Nintendo's getting violent in an old school, 1980s kind of way this week with its Virtual Console offerings.

First up we have Double Dragon, which first saw the drab light of an arcade back in 1987, then made its way onto the NES in 1988. Players take on the role of the subtly named martial arts master, Billy Lee, as he makes his way across a post-Apocalyptic wasteland to... rescue his girlfriend! 1980s' game heroes really didn't know how to hang on to their womenfolk. You can have it for 500 Wii Points - the game, not the girl, you perv'.

Also on offer is The Last Ninja, first released on the Commodore 64 back in 1987. Players must flex their exploration, puzzle solving and combat muscles as they attempt to overthrow the evil Shogun Kunitoki and retrieve some scrolls of the sacred variety.500 Wii Points is what it'll set you back.

Breaking out of the martial arts vein is World Sports. Also originally released on the Commodore 64 back in the time before living memory (1986), World Sports whisks players across the globe to take part in an eclectic mix of sports. Players will wrestle fatties in Japan and compete against malnourished divers in Mexico as they attempt to become the best. It's yours for 500 Wii Points.