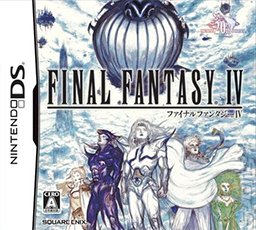 All Images (20) »
Square Enix has confirmed that Final Fantasy IV will be released on the DS in Europe this summer, as well as dishing up a release date for Dragon Quest Swords on the Wii.

FFIV, which was originally released on the SNES waaaayy back in 1991, will feature, "3D graphics, fully-voiced dramatic cut-scenes, an inspiring remixed score and additional content never before seen", according to Square. We're also told, "The game that broke the RPG moulds with its innovative Active Time Battle (ATB) system has been revamped, whilst keeping all the charm of the original release."

The DS version of the game was initially released in Japan last year.

Square also tells us that (deep breath) Dragon Quest Swords: The Masked Queen and the Tower of Mirrors for the Wii will be released in PAL territories on May 9th. Square describes it thusly - "As the hero, the player must use the Wii controller to control their legendary sword, and fight off horde after horde of monsters. Slice at enemies, parry with your shield and block attacks to launch powerful counter-combos." You can find out more on SPOnG's dedicated game page.

First, however, you can find a heap of FFIV screens below.
Companies: Square Enix
Games: Dragon Quest Swords: The Masked Queen and the Tower of Mirrors Final Fantasy IV