Devil May Cry 4 to Hit PC this Summer 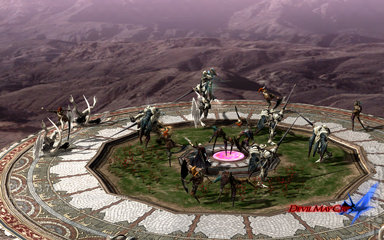 All Images (10) »
Capcom has sent word that Devil May Cry 4 will land on the PC this summer.

PC gamers will get a chance to try before they buy, too. Capcom plans to release a demo before the retail version of the game ships.

The announcement also details all the stuff PC gamers will get that their console-playing comrades didn't. New gameplay options will include Turbo mode, which speeds things up to ridiculous levels; Legendary Dark Knight Mode (has someone at Capcom been reading a lot of Batman?) which will flood the screen with an obscene number of enemies.

On the graphics front, Capcom tells us, "The high resolution screen settings allow the cut scenes of the game to run at up to 120 frames per second (up from 30 frames per second in the console version of the game). Slider options are available to manage various visual effects seen throughout the game. Devil May Cry 4 for the PC will have both DirectX 9 and DirectX 10 modes and will also be compliant with the Games For Windows program."

You can find out more on SPOnG's dedicated game page, but first we suggest you check out the new screens from the PC version below.
Companies: Capcom
Games: Devil May Cry 4

Joji 24 Apr 2008 12:33
1/1
Bravo Capcom. PC gamers are an often forgotten bunch. Its good to see them getting more decent games like this. You guys will need a game pad, though. DMC is a frantic swordfest at best.

Those new modes sound cool. I hope they come to Live latter.