Childhood obesity? Bollocks to it. 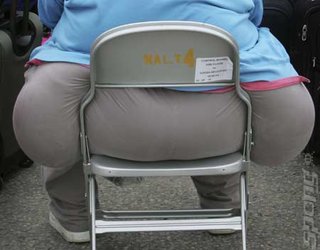 Send more fooooood!
It's Monday. Spring is apparently with us. It's time for a story about a Nintendo Wii game that shines a new light on the best-selling game console. Gone are the "Old people brought to life again by Wii" or "How I lost 90Kg playing Wii" stories. Here instead is, "Man eats 14 plates of sushi to PR new game".

Yes, the Nintendo summit in San Francisco this weekend saw Ninty's PR using a chap called Tim Janus (they don't have rhyming slang in California, right?) as a realisation of a game. Janus scoffed down 141 sushi rolls in celebration of the May 12th release of Mastiff's Major League Eating: The Game. See the video at the foot of this story - if you can still see feet, of course.

Janus is a champion eater at Major League Eating, which is apparently affiliated to the International Federation of Competitive Eating. In short, he can eat a great deal of food quickly.

We turned in English shock (but not awe) to Nintendo in Europe to ask when we could expect to see Major League Glutton Ball - or whatever it's called - in our territory.

"We have no plans to replicate the contest in the UK and we've not announced any details regarding a UK/Euro launch for the game", came the reply.

Phew, now we can get back to our line-dancing and shootin' folk we don't like the sound of classes.