Trauma Center: Under the Knife 2 Confirmed for US

No plans for UK 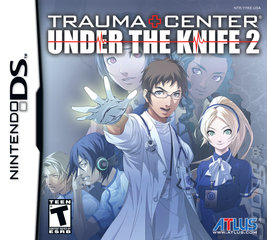 All Images (4) »
Atlus has confirmed that it will release a sequel to Trauma Center: Under the Knife for the DS. For the full title, just add the number '2' to the name of the first game...

The sequel is set to follow the formula of the first game, with Atlus telling us it "returns to the tactile stylus-based experience that made the original a smash hit" - older readers might like to refer to the Operation board game.

Derek and Angie, the protagonists of the first game, will make a comeback. GUILT, the epidemic they beat in the first game, is gone. Now they have to deal with the aftermath. It almost makes Holby City sound tame. We can't imagine it will be nearly as depressing, however.

SPOnG has contacted Nintendo to find out whether it will publish the game over here, as it did with the first Trauma Center (reviewed here), but was told there are "no plans".

You can find more information and screens on SPOnG's dedicated game page. First, however, we recommend that you check out the first video and a taster of the screens below.

What's with those names though? One thing you have to learn is to use the original japanese names. I grow weary of localisations being pushed out with half arsed character western names.

We know its a japanese game, so stop trying to hide it.