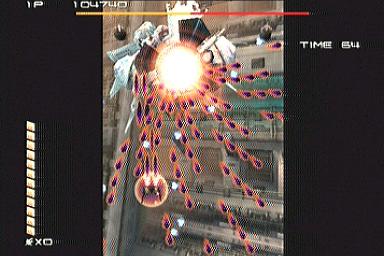 It's an arcade shooter. It has a twist. The twist, in Microsoft's words, is that "players must constantly switch their ship?s polarity to maximize their damage output and avoid incoming enemy fire of the opposite polarity."

A version of the game was first released on these shores for the GameCube back in 2003.

The game comes equipped with a two-player mode which can be used either locally or online. If you don't feel quite ready for that, you can make use of the game's slow motion training mode. New to the Xbox Live version of the game is the option to relive your most triumphant moments with a record and replay function.

Microsoft promises us "manga-style storytelling", "challenging arcade heroics" and "a gorgeous HD environment". SPOnG doubts we'll ever feel as heroic in an arcade-related way as when we got beaten up trying to stop Gemma Jackson's little brother having his change nicked, but that's just us...

The game will be available at 9:00am tomorrow for 800 Microsoft Points.

Spanner 8 Apr 2008 09:17
1/1
Did that heroic act get you anywhere with Gemma?
Posting of new comments is now locked for this page.