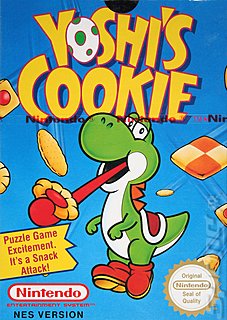 It's Friday! While there won't be a new batch of PlayStation Network content to lighten the back end of this week thanks to an overhaul of the PlayStation Store, we do have a new title heading to Nintendo's Virtual Console service on the Wii. This week, we're being called on for a spot of industrial level food production in Yoshi?s Cookie.

Originally released in 1993 on the NES, Yoshi?s Cookie is a falling block puzzler. Mario and Yoshi need a spot of help. They've been baking cookies by the screen-load and they're coming out of the oven a bit too gosh-darned fast. To help out, Nintendo tells us, "Players must sort and stack the tasty treats, lining up matching rows of cookies horizontally or vertically to make them vanish before they pile too high!" Players can go it alone for a high score or compete head to head with a friend. To get in on the baking action, Wii owners will need to shell out 500 Wii Points.