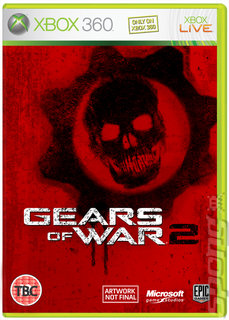 In a continuation of Gears of War 2's Epic roll towards release, the game will be showcased at New York Comic Con (NYCC).

GOW 2 will lead a special gamer summit on Sunday, April 20th. Reed Exhibitions, the show's organiser, tells us, ?The gamer summit will begin with a presentation by Michael Capps, president of Epic Games, and Joshua Ortega, the scriptwriter behind Gears of War 2, discussing the origin of the Gears of War saga, its unprecedented success, and offering a glimpse into this year's upcoming Gears of War 2.?

We can count Ortega as nailed on, then. He was previously only rumoured to be attached to Gears of War 2 in comics gossip column Lying in the Gutters (which appears on the website ComicResources.com. He has a substantial comics portfolio behind him and is best known for his novel <<Frequencies>>.

Ortega also has fingers in many gaming pies. While Reed Exhibitions tells us he works for Microsoft Games Studios, his website credits him as having worked on Blue Dragon and Too Human. Both games were developed independently by Mistwalker and Silicon Knights respectively.

No mention of Ortega, you'll notice. We're going to assume for now that the original Gears' appearance on Ortega's website (along with the original's pack) is some kind of mistake for now and not some indication of covert meddling by Microsoft...

Anyway, of the gamers' summit we're told, ?NYCC's gamer summit was created with the guidance of TenTonHammer.com and Themis Media, publishers of cutting-edge sites like The Escapist Magazine and WarCry Network. The summit will showcase games including Age of Conan, EvE Online, Iron Man, Warhammer Online, and studios including CCP, FunCom, Turbine, and 38 Studios. The summit will also feature round table discussions and topics ranging from video game journalism and writing for video games, to starting a career in the video game industry.?

You can find out more about Gears of War 2 on SPOnG's dedicated game page.

Its nice to know gears of war 2 will be out there year now I guess we will be subjected to the usual images and short vids lol.

Quite a few big titles out this year 2008 is going to be a great year for the Xbox 360 and PS3, not sure if the Wii has anything overly amazing out this year I still think Nintendo are busy closing down fansites and poor boiling water on the hopefulls on DLC and online play...

Modhabobo 3 Apr 2008 11:52
2/2
SS - you say there are lots of exciting games coming out? How many of those are sequels? Fable 2, MGS 4, GOW 2, GT5, Generic Shooter X, RPG 12 etc etc. I am a 360 owner, and i am getting slightly miffed at the lack of anything genuinely exciting. I am looking forward to Alan Wake, but other than that, it is just same old same old. I spend most my time now playing N+ and Geometry Wars. I think the Wii Fit looks pretty interesting, if they can get past the gimmick stage with all the stuff Nintendo has brought out recently, i think the firm will go from strength to strength. Would be nice to see them release a new IP though.
Posting of new comments is now locked for this page.