Pro Game Censorship MP Claims to be 'The Public' 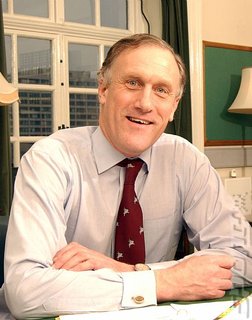 Following the BBFC's 18 rating for Rockstar's Controversial Manhunt 2... sorry that should just have been 'Manhunt 2', the Conservative MP for Canterbury and Whitstable, Julian Brazier has decided that he knows exactly what the public thinks - and the public doesn't like the current rating system.

We imagine that the public loves Brazier's Private Members' bill that sought to introduce yet another layer of censorship to stop adults seeing things that have not previously been eaten by their mothers and then regurgitated.

Anyway, according to Kent Online, the MP has stirred himself to make the following statements regarding Rockstar's Controversial Manhunt 2:

"This shows once again that the BBFC and its appeals system do not meet the concerns of the public. The public wants a significant tightening up in this vital area."

There now - you've been told what you want. Live with it.

Brazier also points out, "We need a consensus that videos and video games involving extreme violence are extremely anti-social. Watching these things happen does affect people?s behaviour. We?ve got to recognise that there?s a strong link."

So, these are things that - according to the MP - we need and have to recognise as facts.

Just one more time we'll offer the rebuttal as follows:

The Bible - full of murders, sex and general unpleasantness - has been filmed on innumerable occasions.

Charles Dickens - a least one beating to death of a woman with a stick and at least one decapitation. Filmed lots.

It's all about the context Mr Brazier!

Okay, our tone maybe a little on the abrupt side for what should be a news story. This stems from SPOnG's belief that, as yet, the public has not risen up in one voice stating that "the BBFC and its appeals system do not meet" its concerns.

We also feel that demanding a consensus largely undermines the point of a consensus.

We also don't like to be told that there are 'strong links' between watching an event and anti-social behaviour by someone not stating any sources.

This is called 'demagoguery' not democracy.

Demagogue: "a person, esp. an orator or political leader, who gains power and popularity by arousing the emotions, passions, and prejudices of the people".
Games: Manhunt 2

His efforts are wasting tax payers money on something they care little for. If the public really cared, they'd be up in arms, with pitchforks and all. Truth is much of the public are gamers. And the rest are those people that either don't play games or don't police what their kids play.

p 21 Mar 2008 00:41
2/3
I don?t want to play this game as I find the concept horrific.
I also don?t want to watch a Simon Cowell program as I find that concept horrific.
And I?m guessing a lot of people would feel the same about at least one if not both these thoughts, they might even make up a majority.
However if there is no proven harm done because some people do enjoy these things then the majority has no right to ban them. So ban Simon Cowell not Manhunt2.

PS It?s nice to see the traditional Tory grasp of a free society.