Haze on Xbox 360 or PC Possible 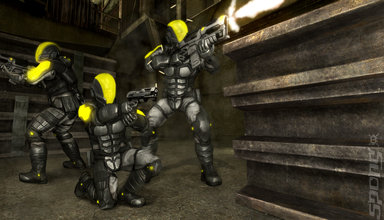 Comments made by Ubisoft to SPOnG suggest that, in spite of reports to the contrary, Haze might not be eternally tied to the PS3.

Responding to the suggestion that Haze will never see release on any system other than the PS3, a Ubisoft representative told SPOnG, "It's PS3 for now. That's our official line."

The words "for now" loom large. It could be that the game is a timed exclusive as many supposed when its PS3 'exclusivity' was confirmed.

It's also worth remembering, as SPOnG pointed out earlier in the week, that Haze was originally planned for release on the Xbox 360 and PC as well as the PS3.

Clearly, that's by no means confirmation that the game will be released for other platforms, but PC and 360 gamers can still hold onto a little bit of hope...

Reports that Haze will never be released on any platform other than the PS3 were kicked off by ripten, which said that two Ubisoft reps had confirmed the information.

Keep your eye on SPOnG for more on Haze in the coming weeks.
Companies: Ubisoft
Games: Haze

Mornelithe 24 Mar 2008 14:16
1/1
As a PS3 owner, i'm definitely excited to be getting this game...however, I'd personally like to see all platforms be able to enjoy this game as well, especially so that FRD can reap the rewards of a job well done.