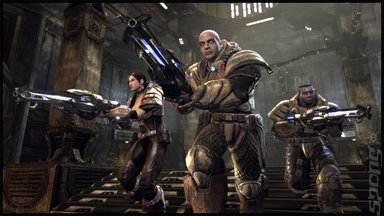 Unreal Tournament 3
Valve and Epic are teaming up to bring some of the Unreal developer's PC games to Valve's online digital delivery service, Steam.

Up for grabs is an assortment of Unreal games, including Unreal Gold, Unreal II: The Awakening and the recently released Unreal Tournament 3. If you want the whole kaboodle, you can get it for the rather tasty price of $59.95 (Ł29.80). If you don't need/want the whole lot, the games are being offered at a 10% discount until March 24th.

So, what did the two companies have to say on the subject? Nice things! "Epic is a leading developer of game engine technology and has produced some of my favourite games of all time", Gabe Newell, president of Valve tells us. "It's an honour to be working with them and offering their current and classic titles to the millions of Steam gamers around the world."

The love is reciprocated by Epic, with the developer's VP, Jay Wilbur, uttering, "Steam is a revolutionary technology that opens up an entirely new way to put our games into the hands of millions of PC gamers around the world. Valve has changed the face of digital distribution for game developers, publishers and consumers, and we are thrilled to be a part of the Steam community."

You can't keep a stubborn, bullish developer down, it would seem. Epic, you may well remember, is currently embroiled in legal issues surrounding the use of its Unreal Engine 3.