The Charts: Mario and Sonic Fight Back

Army of Two lives up to its name 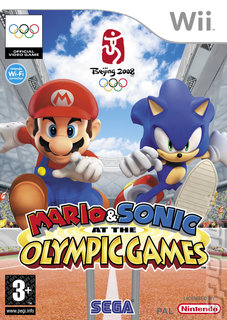 This week's Charts show that you can't keep a good hedgehog or plumber down, with Mario & Sonic at the Olympic Games from SEGA battling back to Number 1.

The duo displace Electronic Arts' Army of Two, knocking last week's Number 1 down a spot as its sales fall 39%. Rockstar's Bully: Scholarship Edition mischievously muscles its way up a spot to Number 3, swapping places with Nintendo?s Brain Training, which now sits at Number 4. Activision spends a third week at Number 5 with Call of Duty 4.

Bully isn't the only title from the Rockstar stable to lurk in the Top 10, with retail promotions on Carnival: Funfair Games pushing it up ten places from Number 16 to Number 6 ? its highest ever Chart position. Activision?s Guitar Hero III: Legends of Rock also benefits from retailer promotion (particularly on the PS2 version), leaping up from Number 20 to Number 7 ? its highest Chart position since its week 2 this year, when it sat at Number 5.

The Top 40 is well-served by long-standing titles. Chart-Track tells us that the average stay in the All Formats Chart is 18 weeks, with DS giants Brain Training and New Super Mario Bros. (which sits at Number 20 this week) having spent a whopping 93 and 90 weeks up there respectively.

We've got a couple of new entries this week. Codemasters? Turning Point: Fall of Liberty for the PS3, 360 and PC debuts at Number 17, one spot ahead of Rising Star's No More Heroes on the Wii.

Expect it to be a quiet one next week. We should see appearences from Ubisoft's Rainbow Six Vegas 2 and Square Enix's Final Fantasy Crystal Chronicles: Ring of Fates for the DS, however.

You can see the Top 10 in full below (last week's position is bracketed). For the Top 40 in full click here.