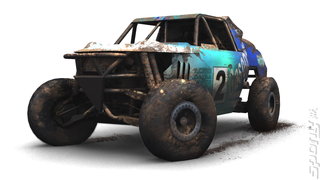 Sony has made its official announcement of the second MotorStorm game and released a juicy new trailer to boot. SPOnG has the goods below.

So, what does Sony have to say on the not-so-secret sequel? Well, it's confirmed what SPOnG told you a few weeks ago - that the action is moving away from the desert backdrop of Monument Valley and onto a tropical island. The Pacific is where this bountiful backdrop of ?thick swamps, dense jungle, towering peaks and steaming volcanoes? will be located.

Did we say 'backdrop'? Well, according to Sony, it's "...not just pretty backdrops to the action, these environments take centre stage in challenging players with everything in Mother Nature?s arsenal. Thick mud, tangled undergrowth, swift flowing rivers, choking volcanic clouds and searing lava pools all test the drivers to their limits and beyond?, the announcement tells us.

What about that kind of mild drizzle that doesn't immediately seem to do much but after five minutes you find that you're soaked to the skin? That's in Mother Nature's arsenal?

Also confirmed is a piece of news SPOnG brought to you back in February ? four player split screen multi-player will be included. This will complement the online multi-player, which will enable 16 players to get involved.

Also new to the game will be Monster Trucks ?that climb, sprint and roll over any other vehicle in their way.?

Sony also carefully avoids calling it 'MotorStorm 2' in the announcement, so presumably it has some other mind-blowingly exciting title in mind. To avoid calling it 'the second MotorStorm game' all the time, SPOnG's sticking with 'MotorStorm 2' for now - it's compact, functional and descriptive.

The game is slated for an Autumn release.

That's all well and good, of course, but what you really want is the trailer. It's just below these words, so dig in.