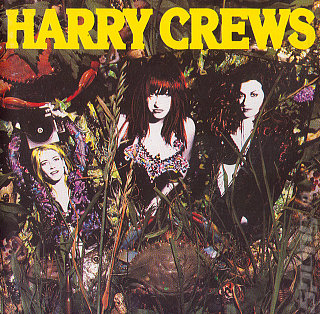 Harry Crews - Andy SPOnG's ultimate band
Disney Interactive has announced that it is getting stuck in to the rhythm genre with a game called (you'd best be ready for this, it's inspired...) Ultimate Band. Yes! 'Ultimate'! It must be like Rock Band, but better!

In a beautiful synergy of popularity (You're fired. ed), the game will be released on the ever-in demand Wii and DS. Disney tells us it is ?working with some of the very biggest names in rock, alternative, popular, emo and indie rock music, allowing band mates to play sets from a broad selection of current hits and all-time rock favourites.? SPOnG would like to see an expansion pack released called 'Ultimate Hair - When Music Genres Clash'...

So, no tricky, copyrighty, expensive peripherals then. A good thing? Opinions based entirely on assumptions from having not yet played the game - to the Forum please!

The Wii version apparently sees players progressing from being part of a garage band to performing on the international stage - right, that is progress, of course. You also get to customise your group of hopefuls as you go.

The DS version sounds like it's taking a more technical approach. Disney tells us, "Players can jam to current and classic songs using the drums, lead guitar, bass guitar, or rhythm guitar. Players can also create their own original songs using the DS touchscreen and stylus to lay down tracks for each instrument and apply creative mixing effects. Ultimate Band for Nintendo DS will also include DGamer (Disney's social networking platform for the DS) functionality which will allow players to engage with others in a secure online community via their DS (Wi-Fi or ad hoc) or computer."

We can see what Disney's doing here ? trying to offer a cheaper alternative to Guitar Hero and Rock Band (although the latter isn't available on the Wii or DS). Having to pay a bit more for a peripheral doesn't seem to be hurting either franchise too much, does it? It may be that the parents who've rushed out to buy Nintendo systems for their little 'uns (as opposed to older gamers who bought them for themselves) find the price of Disney's game a little more palatable, however.

Ultimate Band is being developed by Fall Line Studio over in Salt Lake City in Utah, America, which also developed The Chronicles of Narnia: Prince Caspian. The developer has been working with consultants Radial Music, based down in that London.

"Radial worked closely with Disney to compile the perfect song list for Ultimate Band", uttered David Hill of Radial Music. ?With iconic songs from every decade since the 60s, these games feature music for everyone."

Stop! What iconic songs? What tracks? Which bands? As yet we've not seen a name for either. We've contacted Disney Interactive for more detail.

Disney is not the only publisher to recently get into the rhythm genre. Earlier in the month SPOnG told you about THQ's upcoming Band Mashups, also for the Wii.

Disney is looking aggressive in its bid to broaden its portfolio beyond cutesy licensed properties of late. It's not long since the company announced its off-road racer, Pure.

micta 28 Feb 2008 17:00
2/2
My name is Andy SPOnG (that's what everyone here calls me) and I know some of you hipsters out there'll be thinking 'who the blimmin' heck is Harry Crews and is it really his favourite pop group?' Well cats, the answer is 'Not really'. See, when the HC supergroup was first announced, i got a bit giddy (i'll wager that Doctor Dee did too). An all female line up with Lydia Lunch and the lovely ladies from Sonic Youth and Pussy Galore/Boss Hog, all in one place. Dischordant New York guitar heaven, surely? Well, no - they only lasted one album (it's poor*) and that were that.

And Emo? This black-clad, sullen, whingeing claptrap? Phooey, I say. Musically yours, Black Hole Son (what some other people call me).

*I can't make up your opinion