Plus: Cliffy B an idiot 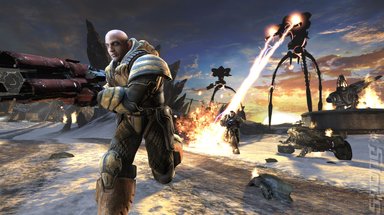 The ever-bullish Mark Rein, VP of Epic Games, has opened his mouth and the doors of controversy once again. This time he has said that Unreal Tournament 3 - which is currently out for the PC and PS3 and has an as yet undecided Xbox 360 release - has a better online offering than Microsoft's Halo 3.

Rein also went on record recently to call his colleague, Gears of War creator Cliffy B (Bleszinski) an idiot. Responding to Bleszinski's comments that, "I think the PC is just in disarray"?, Rein said, "Oh he's an idiot"??.

He did, of course, go on to qualify that with, "No, he's a great guy. Cliff makes console games though, right? He's on a console team that makes what is primarily a console game."

Rein also recently put a starting price of $2 billion on Epic in response to predictions that the developer would be sold to Microsoft. That's more than EA offered to buy Take-Two for...

The Absinthe Review Network 25 Feb 2008 19:30
1/3
Cliffy was being honest. Rein was being an envious, console-bigoting ass. End of story.