A week after blaming Sony of Japan for mistakes? 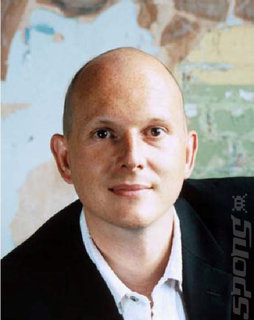 Soon-to-be former Sony employee, Phil Harrison.
The President of Sony Worldwide Studios has resigned with what, in the world of big business, passes for immediate effect. Phil Harrison will vacate his role at Sony on February 29th.

Harrison has been with Sony since 1992 and was a key player in the foundation of Sony Computer Entertainment and the PlayStation brand.

According to the official information available:

"Kazuo Hirai, President and Group CEO of SCEI, will immediately assume responsibilities as president of SCE WWS, in addition to his current duties."

The first tranche of press releases, however, lacked comment from Harrison himself. We have just received an update from Sony in Japan containing just such a bridge-fire extinguishing quote:

"The past 15 years at Sony Computer Entertainment has been the defining journey of my life so far.

"I am grateful to all the PlayStation family for their incredible support, guidance and friendship. It has been a privilege to serve as part of the team and be inspired by them on a daily basis. I am so proud of everything PlayStation has achieved and will continue to support its future in every way I can.?

This comes a week after Harrison, speaking at a private meal at the Game Developer Conference (GDC) in San Francisco, blamed Sony in Japan for missing the 'casual' gaming boat. Harrison was widely quoted as saying:

"It's frustrating for me to experience, because I've been saying for years that playing games together is the future, but the guys in Japan [Sony] said that people just didn't play that way.

"The Wii ads show the perspective from the television ? of people on the sofa having fun together ? which is very clever, so how pissed off am I??

Apparently, very pissed off indeed. The question is, however, was Harrison expressing his disenchantment in the full knowledge that he was going to resign? Or was this, not-so-private, expression a reason for SCEI's president Kaz Hirai to request the resignation?

In fact, we contacted Sony for clarification last week and were told, "I'm afraid this was taken from a private lunch, so we're not making any further comment on this".

When we say, 'not-so-private' we mean it. Although only 20 people were present at what is now clearly Harrison's swansong, these included: Harrison with Raph Koster (lead designer of Ultima Online as well a former CEO of Sony Online Entertainment), Neil Young (Vice President and General Manager Electronic Arts Los Angeles); Peter Molyneux (Lionhead); Chris Taylor (founder and CEO of Gas Powered Games) and David Perry (Acclaim, Shiny Entertainment and more).

The feeling around the industry is largely one of shock at the departure - and immense curiosity as to his next step.

Apparently, Sony for its part is sorry to see him go, with Kazuo Hirai saying:
"As one of the founding members of SCE, Phil played a key role in the development and growth of the PlayStation business and our industry.

?It is sad to see him departing from SCE, but I wish to express my gratitude for his many invaluable contributions and also wish Phil the very best of luck in his future endeavours.?

Bets are currently being taken on where he will pop up next. With Electronic Arts currently on the path of change, that could be worth a few pence at the bookies. Another wager that could reap some reward is that Harrison is to take up the considerable challenge of getting the troubled Infogrames-owned Atari brand back to its former glory. It must be stressed, however, that nothing is confirmed.

This is especially true of the future of Sony's first-party games development for PS3.

Nov|'13
Oh Noes! Microsoft Might Not Have Enough Xbox Ones
Jan|'17
The Last Guardian
Nov|'16
Robinson: The Journey
Nov|'16
Until Dawn: Rush of Blood

HyperTails 25 Feb 2008 14:39
1/5
Its kinda dissapointing to see Phil Harrison leave. He came out with some good points and came across as an actual gamer, not some suit waiting for his vast paycheck spewing mindless crap (Jack Tretton).

Well, good luck to him wherever he goes. He has been an influential figure for Sony over the years so he should do well somewhere else.

Bentley 25 Feb 2008 16:41
2/5
He was a tit. I will never forget the "rumble is last-gen" crap he came out with. I lost any faith I may have had in the goon that day. I even delayed getting a PS3 until I was certain it was coming back- it's an essential part of the gaming experience. I don't like being TOLD that it's NOT and I am WRONG by someone who has lost touch with the gamers. I knew I was right about rumble and it would have to return. I knew it, but Phil Harrison didn't. Therefore, what the hell was he doing in charge of PlayStation? Dropping the 60GB, dropping BC, lies, massive damage; all things that I personally would never let happen had I been I in his position. The man's a tit, and nearly killed PS3 in the end. Thank goodness the machine itself is good enough to get over the lies from Sony suits like Igor there. Good riddance. All the best for the future, Phil, but you were awful.
more comments below our sponsor's message

His last few years after the PS2 success has been a roller coaster of speaking engagements and poorly thought out off the cuff comments.

Some of us in the industry have never been happy how much of the praise Phil has taken on himself for Sony games success - in particular the eye toy, which he claimed was his idea only to avoid being drawn on the point in later interviews.

We also have to look at the internal difficulties and management failure that Phil has generated since PS2 - he did start to believe his own hype and that cause a collapse in moral at Sony that has reflected in the poor performance of PS3.

It is a sacking - I know a number of the media owe Phil big-time, and will continue to owe him - but lets be clear he was let go, and has been ejected. It looks like this was planned since the shake-up in Japan (sacking of PS3 head). Its just interesting to see if Phil knew it was coming this month, or wanted to leave on his own terms so made the contraversal statements at GDC?

It is good to see Phil go - along with Jane at SCi, Larry from Atari and Rod soon to go from Codemasters we could see a removal of the old guard in the UK business - investors wanting professionalism from their management.

Though there is no way Harrison nearly killed the PS3.