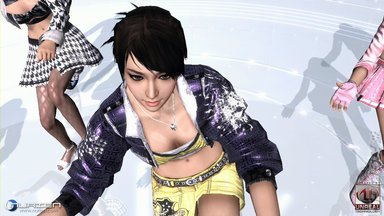 Right, if you are a hardcore gamer who thinks that the nearest that Epic's Unreal Engine 3 should come to dancing is when rendering the twisting shades of a dance of leaden death, you might want to stop reading right now.

GDC has seen a company called Nurien Software, "a leading developer and operator of social networking and online game services", showing off its "next-generation social networking offering". So far, so 'social networkey'. But it is at this point that any true hardcore gamer might want to throw up his hands in despair and announce that he is giving up games forever. Why? Because Nurien is using Unreal Engine 3 in its offerings.

The game(s) in question are:

MStar, "a rhythm dance game that blends user-created content, customizable characters and virtual dancing in a fun, open environment... players can buy clothing and props using microtransactions, and even create music videos that can be shared with other players".

We can hear the sobs from grown men... but wait, there's more.

Runway is "an innovative fashion show application that enables players to perform as both apparel designers and runway models".

Finally, there is QuizStar, "a casual online trivia game".

Jay Wilbur, vice president of Epic Games is quoted as saying, "What makes Nurien?s platform so exciting is the fact that it pulls Unreal Engine 3 into an entirely new arena". Too bloody right it does. In fact, it takes it into a very intriguing - and quite attractive new world. See the video below for proof.

But then it get nasty again, with mention of the whole 'social networking' element. "We wanted to create a social virtual world ? sort of like a 3D MySpace ? where users can create, collect, combine and share legacy media such as music, photos, video as well as 3D objects such as clothing, furniture, pets, cars and more, all in a beautiful 3D environment?, said Taehoon Kim, co-founder of Nurien Software, who continued:

?We wanted to give users a powerful new vehicle for self-expression that breaks down real world limitations. We at Nurien believe that if people created homepages in the ?90s to express themselves, and if they have migrated to blogging and using social networking sites like Facebook and MySpace today, then the next natural step will be to inhabit fun, virtual worlds with user-created avatars.?


Arhghgh! "Virtual worlds"... someone stop him before he says, "Second Life".

Thanks to Unreal Engine 3, characters in the avatar system move realistically due to the assignment of unique physics values to body parts, hair and accessories like earrings, necklaces, bracelets, ties, gloves and skirts. Each component moves independently within the avatar environment, enabling characters to simulate realistic physical movements and take on lifelike personas.

The closed beta service for Nurien?s next-generation social network platform, which has been in development for three years, will begin in March 2008. The service is expected to officially launch in Korea in the latter half of the year, followed by China toward the end of this year.

The full "3D social networking experience" is scheduled for release in Korea during mid-2008, in China during Q4 2008 and in North America next year. No news for Europe, so maybe we'll see an influx of bewildered Gears of War and Unreal Tournament players shipping themselves over here?

tyrion 20 Feb 2008 18:50
1/4
characters in the avatar system move realistically due to the assignment of unique physics values to body parts
Ah yes! Physics to natural they just have to be applied to breast bounce. :-)

config 20 Feb 2008 19:05
2/4
And yet they still get it wrong. No so much Uncanny Valley as Uncanny Cleavage
more comments below our sponsor's message

Daz 20 Feb 2008 20:22
3/4
tyrion wrote:
characters in the avatar system move realistically due to the assignment of unique physics values to body parts
Ah yes! Physics to natural they just have to be applied to breast bounce. :-)

config wrote:
And yet they still get it wrong. No so much Uncanny Valley as Uncanny Cleavage

Oh, so that's what Dancing Games are for

deleted 20 Feb 2008 21:02
4/4
Yeahhh, Finally i can be a dancing chav the game of my dreams, do the outfits contain hidden knifes, my fav was the hoodie!
Posting of new comments is now locked for this page.