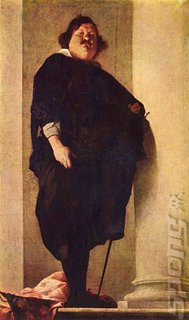 Life before My Weight Coach (not official Ubisoft promotional material)
Not wanting to miss a perfectly good bandwagon, Ubisoft has announced that it will publish My Weight Loss Coach. As the title suggests, the idea is to get you into shape using a Nintendo platform. Sound familiar?

Ubisoft tells us that the software (SPOnG's a bit loathe to call it a game) is being developed in conjunction with a fitness instructor and a nutritionist and "is a program designed to focus on taking positive steps to maintain a healthy lifestyle."

It doesn't sound like Ubisoft is going quite as far as Nintendo with Wii Fit in its bid to pay us back for all those hours it encouraged us to spend sprawled on the sofa. The DS, after all, doesn't have motion sensitivity like the Wii. The publisher obviously decided that it can't leave our physical well-being entirely down to a stylus and touch screen, however, so it is releasing a peripheral. Nope, it's not a DS Balance Board, it's... a pedometer.

?My Weight Loss Coach allows us to approach casual gamers with something innovative?, uttered Tony Key, senior vice president of sales and marketing at Ubisoft. ?The game creates customized coaching sessions based on skill level, and, for the first time on DS, includes a pedometer. My Weight Loss Coach not only allows users to take control of their physical well-being, but it does so in a fun and engaging manner.?

The software will feature the option to build your own profile as well as log and measure progress.

The game joins titles such as My Word Coach and My Spanish Coach in Ubisoft's 'My Coach' brand.

The game is being developed by they of Assassin's Creed and Far Cry 2 fame, Ubisoft Montreal. As SPOnG told you yesterday, the studio also has some mystery Wii projects up its sleeve.
Companies: Ubisoft
Games: My Word Coach

The Absinthe Review Network 12 Feb 2008 20:09
3/3
Unfortunately, I'm already in magnificent shape, but if I wasn't this would be pretty nifty. My only concern here is that the exercises will likely be in a very narrow field, to cater to the "on-the-go" and the "I'm-a-casual-gamer-and-only-have-six-minutes-to-play-on-the-bus" audiences. You can't very well assign push-ups in a game like this...

Wait, did I just say being in shape is "unfortunate"...?